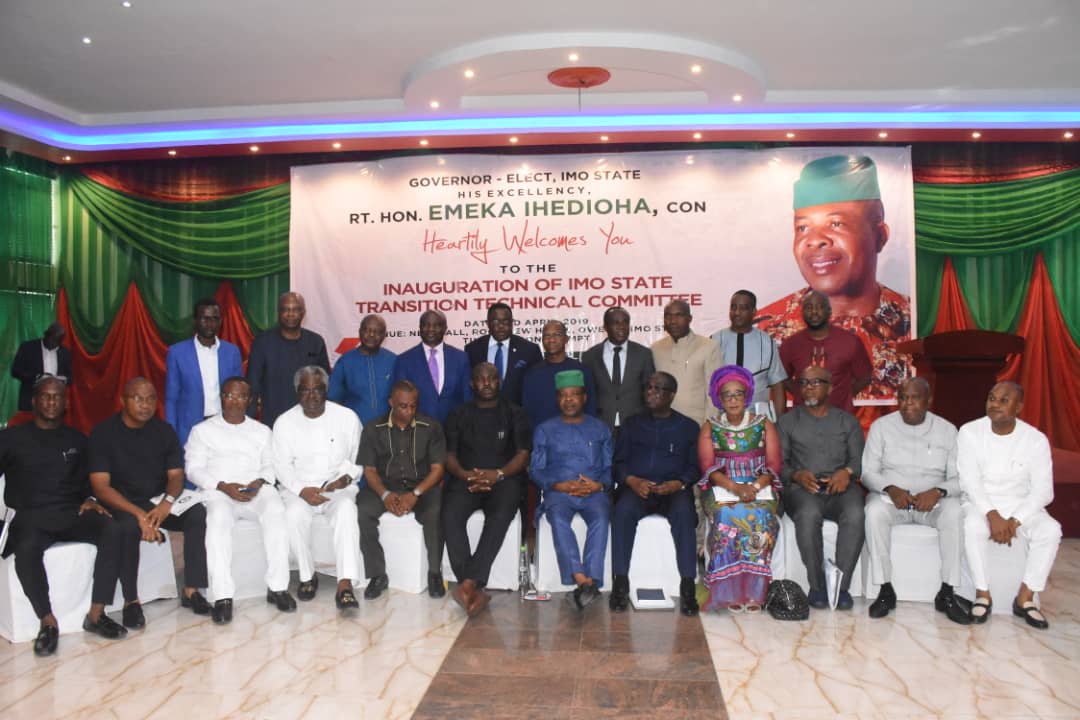 The announcement and subsequent inauguration of the 140 members of Transition Technical Committee (TTC) by the Governor-elect of Imo State, Rt. Hon Emeka Ihedioha, has continued to elicit diverse reactions from different segments of the Imo society, particularly the political class. Since the announcement of the members of the TTC, some people have taken it upon themselves, especially the followers of the outgoing administration to indulge in pernicious criticism of the list.

Of course, such should be expected from some people who feel bruised and deflected that their meal ticket has been deprived of them. Anybody expecting them to applaud any policy of the in-coming administration no matter how laudable or lofty such policy may be , would be deceiving himself.

I have chosen to laugh over some of the misguided and petty upbraids of the out-going government’s paid hirelings against the TTC composition because 90% of the critics lack the intellectual finesse to even comprehend what they are criticizing, talk more of appreciating the import or sublime essence of the existence of the TTC. Most of them criticize out of anger and nothing more. So why must one dissipate precious energy educating them on what they do know when they have vowed not to learn? Nobody flogs a dead horse.

However, the recent diatribe against the TTC by Prof Nnamdi Obiareri, former Dean of Law Faculty, Imo State University, Owerri, the same day the Committee was inaugurated, could not be glossed over. Prof Obiareri is a well educated man of note, whose opinion on an issue can’t just be waved off no matter how senseless it might appear, as in the present circumstance. I was jolted that Prof could so debase his academic height by joining the band wagon of intellectual Lilliputians to pour venom on a team comprised of seasoned academics (like himself), business moguls of repute, financial experts and distinguished members of the political class. I felt ashamed of Prof.

The crux of his argument as I distilled them were four. One, that women were marginalized in the composition of the TTC. Two, that the youths were excluded and three, old people were recycled. Four, that the Mbaise indigenes dominated the list. The rest he said were mere gibberish and insipid. In fact, prof sounded like a broken piece of Victor Uwaifo record of the early 1970s.

I have often said it that while criticism is good in a democracy, one however, must not criticize to run a system down, especially where the critic is bereft of facts. Prof Obiaraeri rambled and wobbled while struggling to marshal out non existing facts to justify his disdain for the TTC. I sensed apprehension in his write-up and wondered why he should be apprehensive. The TTC is on a fact-finding mission only and not to witch hunt anybody. Why the fear?

Prof attacked the TTC list on behalf of the feminine world, saying that they were not given 35% representation in the committee. He forgot that the women folk are not even complaining yet he chose to cry more than the bereaved. The vice Chairman of the committee is a woman of repute and former ambassador, Dr. (Mrs) Kema Chikwe. Former Director-General of the Nigerian Stock Exchange, Dr. (Mrs) Ndi Okereke Onyiuke is also heading a sub-committee. Former Permanent Secretary, Dr (Mrs) Joy Njemanze, Prof. Florence Nduka and Mrs. Nneka Davis Ihekweme are also on the list. Still counting, the list also contains Dr. (Mrs) Cate Osuji, former Head of Service, Dr (Mrs) Agatha Ndugbu, Mrs. Chidi Ngoka, Dr. (Mrs) Bibiana Okoroafor and Ambassador Adaobi Obioha. Prof. (Mrs) Viola Onwuliri, Dr. (Mrs)Agatha Anosike, Ugoeze – Edith Ohanwe, Dr. (Mrs) Rita Amakiri etc are also there. These are credible women of substance and stupendous pedigree.

Perhaps, the only conspicuous woman missing on the list is Prof. Nnamdi Obiareri’s wife. One can therefore, understand his pitiable grouse and sudden metamorphosis into an advocate of the women folk.

On the youths participation in the activities of the TTC, Prof also raised issues. He again lost sight of the fact that his younger brother, Dr. Nnaemeka Obiareri is on the list. His younger brother, a seasoned financial consultant, was my class mate at Emmanuel College, Owerri. The Fresh Democratic Party candidate in the just concluded governorship election in Imo, Mazi Excel Nwaneri Ochiama is a vibrant young man I know too well who is also on the list. There is also Mr. Anselem Okorie, the Young Peoples Party guber candidate, Dr Linus Okorie, Okey ‘Bakassi’ Onyegbule, Kanu Nwankwo and many others whom Prof do not know either in person or by name.

Besides, this is just a transition committee and not a formal cabinet or exco. The life span of the TTC is six weeks only. Why the hullabaloo?

Again, the task of the TTC is gargantuan. It is not a money making committee neither are the members to be remunerated. With due respect, only few committed youths would accept a non-remunerated assignment such as that of the TTC.

And Prof. Obiaraeri knows this. Being unnecessarily mischievous is not a laudable virtue. Prof must stay away from that. I don’t know Prof to possess the characteristics of an imp unless he wants to prove me wrong.

Thirdly, the issue of recycling of old men in the committee as alleged by Prof Obiaraeri sounds ridiculous and ludicrous. Prof failed to name the recycled people. Is it Dr. Ernest Ebi (Former Deputy Governor of Central Bank of Nigeria), who is the TTC Chairman, that he was referring to? Is it former National Electricity Regulatory Commission (NERC) Chairman, Dr. Sam Amadi or the committee’s secretary, Chinedu Okpaleke or Dr Abraham Nwankwo or the 19 Professors (his colleagues) or the 12 reputable engineers or the plethora of captains of flourishing industries in Nigeria – that Prof. Obiaraeri were referring to?

Honestly, I am appalled that a man like Prof Obiareri recklessly dabbled into this myopic criticism. Perhaps, if Prof had been appointed into the committee, this diatribe of his wouldn’t have arisen. Some people, piqued as I am, contend that he is a serial ‘cross-carpeter’ or more lucidly, an AGIP (Any Government in Power), while another group argue that he is a cliff-hanger and fair weather friend.

These undignified toga notwithstanding, let Prof calm down. The umbrella is very big to accommodate everybody, after all, life is all about hustling. For a Prof to be a hustler also isn’t bad. The good thing is that Rt. Hon Ihedioha has promised to run an all inclusive government and this has clearly reflected in his first appointment as could be seen in the composition of the TTC. Ihedioha is not a leader who succumbs to blackmail, sycophancy or media intimidation. Those are not options.

Of all Prof said, the most debasing one on his integrity was the reference to an mbaise clan dominated TTC. This assertion is infantile, puerile and most unfortunate. A blind man may be told that there is no oil in the soup but not there is no salt. Except Prof, nobody, not even the silliest among the arm-chair critics has raised this baseless and nonsensical accusation. Prof Obiareri why?

For want of what to write negatively against Rt. Hon. Ihedioha and the Peoples Democratic Party (PDP), Prof resorted to gutter tactics. A whole professor of law! May God redeem some of our academics.

Prof, I can recollect vividly, is a progeny of PDP right from the Chief Achike Udenwa eight years tenure as Governor. Dr. Ikedi Ohakim came in and also adopted him. Why attempt to run down PDP which gave him the political ladder to climb up? Obviously, he must have been heavily infested and intoxicated with Okorocha’s Iberiberism. Chai, who did this to our Prof Obiareri? His association with Okorocha has clearly beclouded his hitherto known and applauded intellectual prowess. What a pity!

On the TTC itself, we must salute the foresight and courage of Rt. Hon Ihedioha in constituting and inaugurating these 140 apostles of good governance in Imo. To assemble these great men and women across all strata of human endeavour and political divides, confirms his commitment to recovering and rebuilding Imo.

According to Ihedioha while inaugurating the committee, “we cannot deliver on our promise of good governance without leveraging on the experiences and expertise of the broadest possible diversity of Imo people encapsulated in this committee. The TTC will help us with a clear road map to achieve the goals we have set for ourselves.”

From all indications, the TTC was a conscious and deliberate effort by the in –coming governor to lay sound footing ahead of the formal take-off of his administration on May 29, 2019. A meticulous x-ray of the membership of the committee confirms the agglutination of the brightest and best brains in Imo from different fields of human endeavour. Another gladdening observation is that everybody invited to serve in the TTC responded in the affirmative.

The in-coming governor has therefore undoubtedly shown a clear departure from the nepotism style of the out-going governor, Rochas Okorocha through the setting up of the TTC. About five governorship candidates of other political parties made the TTC team, the three geo-political zones are amply represented, 19 Professors of different academic backgrounds are there, 12 distinguished engineers also made the list, technocrats, captains of industries, financial experts and the political class are equally there. In fact, with the caliber, capacity and pedigree of the membership of the TTC, any well meaning Imolite should heave a sigh of relief that alas, Imo is getting back on track. The signs are obvious and we thank God for delivering Imo from the hands of out-going Emperor Alhaji in Douglas House.

Finally, on Prof Nnamdi Obiareri’s thoughtless jibes on Rt. Hon. Emeka Ihedioha, using the TTC composition as a pivot, I can only remind him of William Shakespeare’s description of indecorous write-ups such as his as“tales of an idiot, full of sound and fury but signifying nothing”. Prof should not allow posterity to judge him harshly.

He is a man most people respect highly. He should therefore, strive to live in concomitance with the people’s elevated perception of him or in the alternative, adorn himself with the degrading toga of iberiberism. Chinua Achebe said that “if a lizard of the homestead does not do the things for which it is known, it might be mistaken for a lizard of the forest”.

Prof can still turn a new leaf. It is not too late for restitution.

Scientists Claim To Have Found Drug That Kills Covid 19 In...

innonews - April 7, 2020 0
Scientists in Australia have claimed to have found an already existing drug that kills COVID-19 in the laboratory within 48 hours.