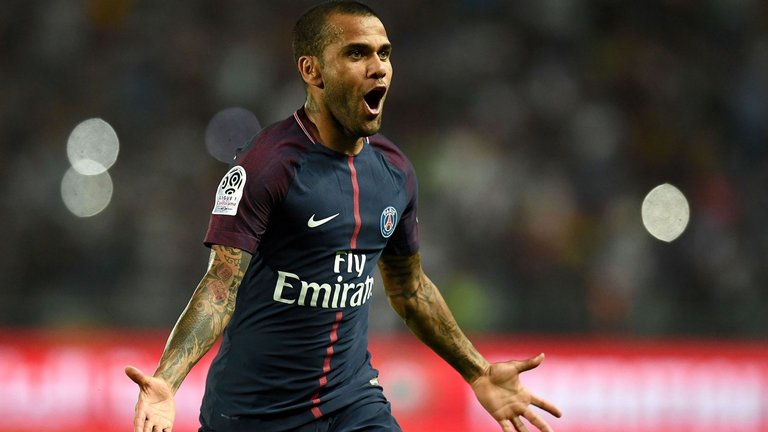 Paris Saint Germain defender, Dani Alves may leave the club to rejoin a premiership as his representatives may  look to secure him a club in the English Premier League, EPL, in this summer’s transfer window.

UOL Esporte reportsthat the 36-year-old has frustrated PSG by delaying his decision on whether to sign a contract renewal at the club.

The Brazilian newspaper claimed that Alves’s current contract at PSG will expire in June and the former Barcelona and Juventus star is said to be looking for a two-year deal in the Premier League as his career draws to a close.

The report claimed that the right-back has received interests from Manchester City, Manchester United and Chelsea in the past.

Asked about his future at PSG, Alves told Spanish TV as he attended the Spanish Grand Prix in Catalunya last weekend that: “For the time being, I have not made a decision for my future, the only clue I can give is that I have a lot of options.

“It’s not something I like to think about. Until the end of June I am with PSG and until then I will give me 200% to the club.

innonews - September 20, 2017 0
Imo State Governor, Rochas Okorocha has said it is unfortunate that Igbos play the worst politics among the ethnic and geo political zones in...

innonews - July 26, 2017 0
A Nigerian, Marvyn Iheanacho has been sentenced to life imprisonment for the death of his five year old son. Reports said the 39 year old...

innonews - December 5, 2017 0
Nigeria and other African countries that qualified for FIFA World Cup in Russia in 2018 will get $500,000 each from the Confederation of Africa...

innonews - April 7, 2020 0
Igbos have been advised to shun Chinese face masks or be treated by Chinese doctors invited by the Federal Government