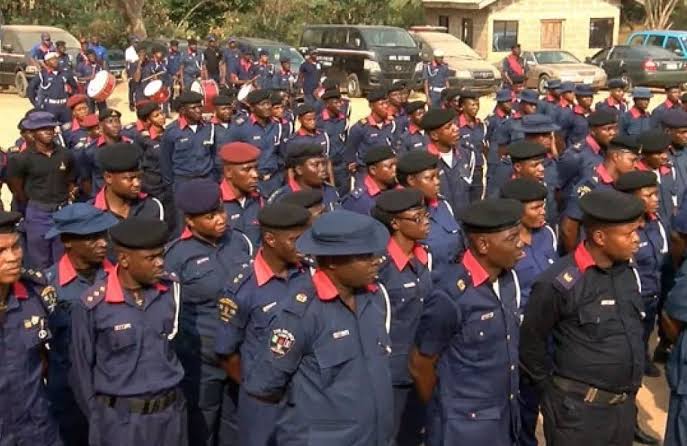 The Imo Commandant of the Nigeria Security and Civil Defence Corps (NSCDC) Com. Raji Ibrahim, has called for enhanced collaboration among security agencies in the country for effective security of lives and property.

Ibrahim made the call when the new executive members of the Nigeria Union of Journalists NUJ, Imo Council led by Mr Chris Akaraonye paid him a courtesy visit at his commands office in Owerri.

He said that unity and collaboration was essential among the nations security agencies for proper information disemination and management in the area of security of lives and property of Nigerians.

He noted that one of the core duties of the NSCDC was to secure lives and property adding that the command under him had engaged in same since he resumed duties in Owerri few months back.

“Information management is very important especially in the area of security. There is need for collaboration and unity among security agencies in the country in this regard to tackle insecurity.

Ibrahim explained that the corps has acheived a lot in his short time in Imo and have made some arrests as it patterns to vandalism of electricity installations and oil bunkering.

He called on the government to invest in community policing for an effective impact.

The commandant expressed gratitude to the NUJ for the visit and pledged the commands readiness to always support the union in their endeavours.

He said that the roll of journalists in the development of any country could not be over looked or over emphasied describing the journalist as an image maker and a person who could make or mar a person or country.

Earlier, the NUJ Chairman, Mr Akaraonye said the visit was to interact and welcome the commandant and introduce the new NUJ executive to him whom were elected in a free and fair election.

He said the union has had a good working relationship with the corps and prayed that it would continue.

He promised onbehalf of the journalists in the state to assist the command in disseminating information about their activities.

Akaraonye said the union would soon constitute a committee to checkmate quackery in the profession to sanitize the union and guide against fake news adding that those who engage in writing damaging reports or fake news are not journalists.

innonews - October 12, 2020 0
The South East has stepped up agitation for a Nigerian President of Igbo extraction in 2023 By Constance EKE,...

innonews - December 9, 2017 0
The governorship ambition of Chief of Staff, Government House, Owerri, Chief Uche Nwosu may be real afterall as 27 members of the Imo State...

innonews - December 10, 2019 0
The current ordeal of former Abia State Governor, Orji Uzor Kalu, who was sentenced to 12 years in prison by an Abuja...