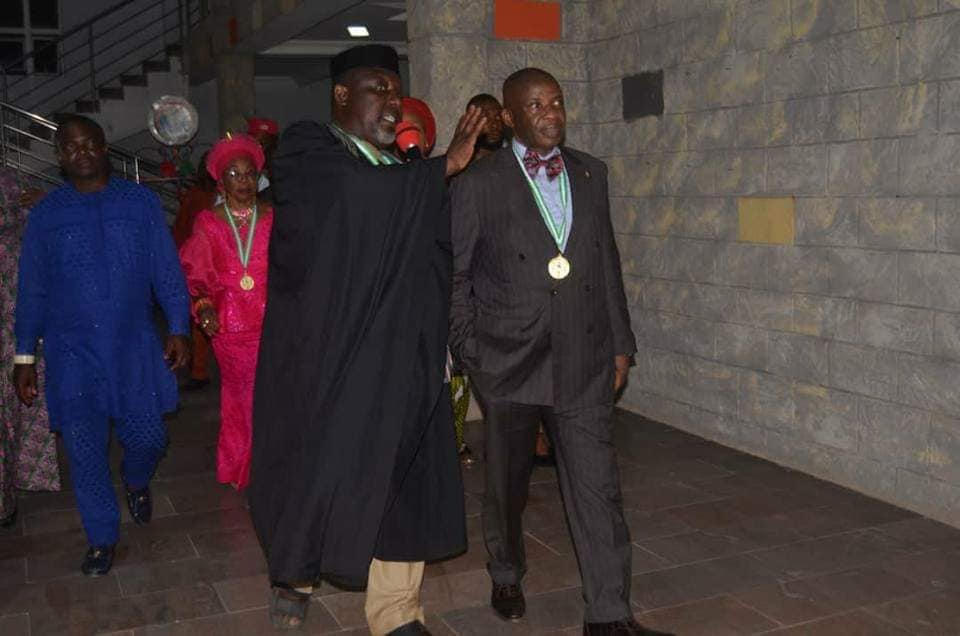 The social media has been abuzz over parting gifts by outgoing Governor of Imo State, Rochas Okorocha to his predecessor, Ikedi Ohakim.

Ohakim received the Imo Merit Award from Okorocha and a duplex. The duplex were also given to former Governors of the State, Late Sam Mbakwe and Achike Udenwa.

Pictures which surfaced online showed the Imo Governor taking Ohakim round the Imo Hall of fame.Reactions have trailed the event as Imolites took to the social media to react on the development.

Ohakim is known to have strongly criticized Okorocha’s policies and programmes during his eight years in office.

But Barr C.O.C Akaolisa, a chieftain of the All Progressive Congress, APC in Imo State, described the award on the former Governor as shocking.

In post on this newspaper whatsapp platform, Akaolisa wrote “ As for Ohakim, he is at liberty to forgive Rochas but dining and wining with him is a shock to me”

He said the House given to Ohakim by Governor Okorocha was not a personal gift from the outgoing Governor but part of Ohakim’s entitlement as a former Governor of the State.

Ughalla said that Ohakim received the Imo Merit award based on the fact that Okorocha has recognized Ohakim as one who performed when the latter served the State as Governor.

He said Okorocha now believes that indeed Ohakim performed creditably when he was Governor, stating that the Imo Merit Award is recognized by law as approved by the Imo State House of Assembly.

innonews - August 15, 2018 0
Chelsea and Super Eagles defender, Kenneth Omeruo is in Madrid ahead of a move to Leganes. Omeruo has concluded medicals and the club will unveil...

innonews - May 29, 2019 0
*As Pastor Ofurum admonishes Christians on Covenant with God* *By Ikenna Orioha* Founder of Divine...

Imo PDP In Dilemma Over Secondus

innonews - December 2, 2017 0
The decision of Northern leaders of the Peoples Democratic Party,PDP to reject the chairmanship ambition of Prince Uche Secondus in preference for aspirants from...

innonews - September 5, 2019 0
10 persons were killed, two of them foreign nationals in the recent outbreak of xenophobic riots and attacks in South Africa.