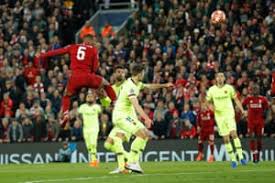 In amazing come back, Liverpool beat Barcelona, 4-0 to reach the final of the UEFA Champions league.

The Reds came into the second leg of their semi-final trailing 3-0 from the game at the Nou Camp.

However, an early goal from Divock Origi inspired Jurgen Klopp’s team into belief, as they went into the break one goal up.

Gini Wijnaldum, on as a substitute for Andrew Robertson, netted a quick-fire double in the second half, to level the tie on aggregate.

Liverpool booked their place in the final, after Origi pounced on a smart corner-kick from Trent Alexander-Arnold, to make it 4-0 and sent Barca out.

They will now face Ajax or Tottenham for the trophy.

Catholic Bishops: Why We Banned Mbaka, Others From Promoting Partisan Politics