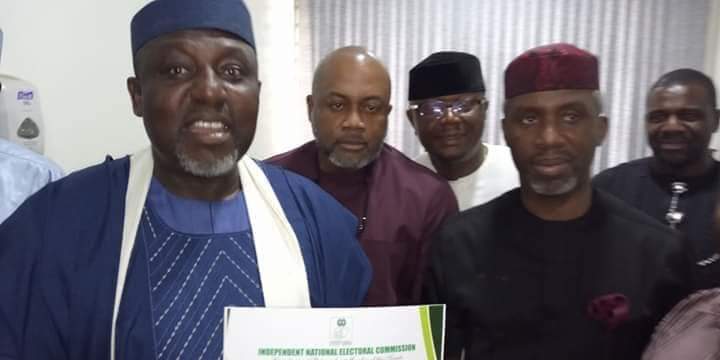 Photos of the ex Governor showing his Certificate of Return alongside his political loyalists surfaced on the social media on Wednesday evening.

This newspaper had reported that INEC will meet today to deliberate on the matter after a Federal High Court ordered the electoral umpire to issue the ex Governor a Certificate of Return.

As INEC officials met, an Owerri High Court presided by Justice Ukoha urged INEC not to stand down on its resolve not to issue Okorocha a Certificate of Return.

The former Imo State Governor was reported to have been denied access to the Senate chambers where senators took part in electing the leadership of the 9th Senate.

innonews - June 1, 2019 0
The Imo State chapter of the All Progressive Congress, APC, has passed a vote of confidence on the Party’s National Adams Oshiomole....

innonews - December 24, 2019 0
The Imo State Chairman of the Nigeria Union of Journalists( NUJ), Imo Council, Chief Chris Akaraonye has felicitated with all journalists in...

Imo And The Bubble Burst. BY CHIDI NKWOPARA

innonews - August 26, 2018 0
Imo State has, at several times , been in the news, and many say without hesitation, for the very wrong reasons. Each new day...