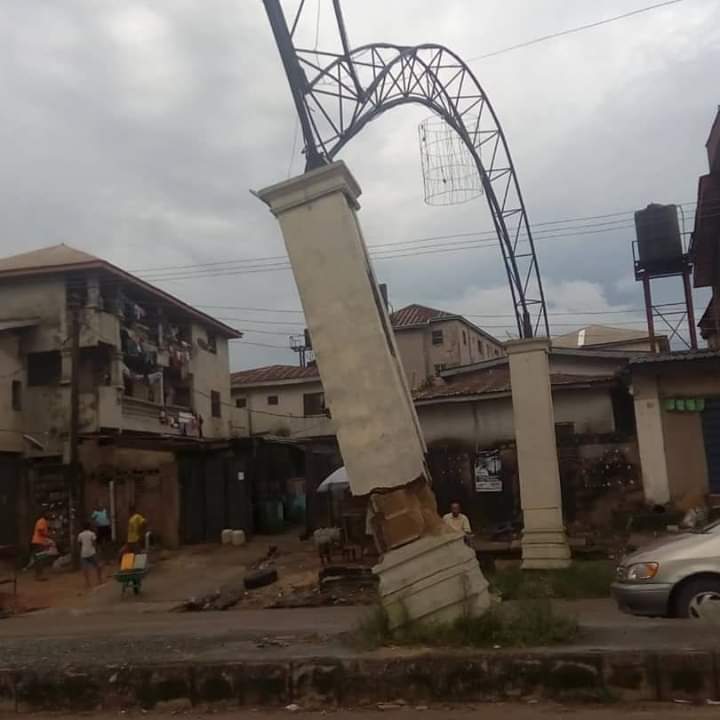 A pro good governance sociocultural organization in Imo State, Olu Owerri has raised alarm over what it described as time bomb waiting to explode in Imo State in a matter of days, as iron fabrications and block pillars now fall on vehicles and children playing on the streets.

The President General of the Organization, Chief Martin Opara who addressed the press after an extra ordinary emergency meeting of the group called on Governor Emeka Ihedioha to expedite action to urgently dismantle all the metal fabrications and block pillars built by former Governor Rochas Okorocha as they now pose serious threat to road users, children and passersby.

Chief Opara noted that apart from the fact that the fabrications were done with mere light pipes and very weak blocks used to form the now collapsing pillars, the structures were built by the last administration solely to create stands for the wasteful decoration contracts of over eight hundred million naira, given to the former governor’s elder sister every Christmas and easter season, and therefore has overstayed its usefulness.

He insisted that the Owerri people in whose neighbourhood these deadly traps were planted to fall on their children and visitors may be tempted to resort to self help if the government fails to act.

He commended the new government for its prompt intervention in dismantling the many that have fallen so far, urging the Governor to avert any tragedy by totally remiving the structures now.

‘Nigeria May Recover From Covid 19 Next Year’ NCDC DG, Ihekweazu

innonews - May 3, 2020 0
Nigeria may return to normalcy from the coronavirus pandemic next year, ruling out the end of the virus in 2020.

innonews - May 9, 2018 0
Photos of the level of work at the second Niger Bridge, South East Nigeria