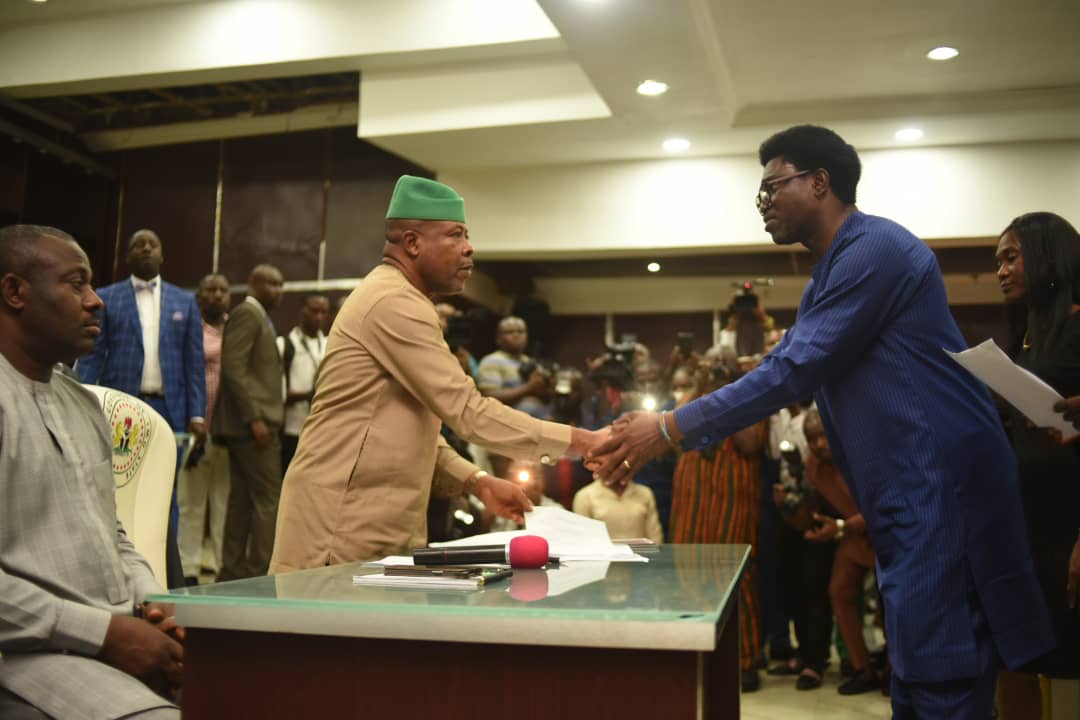 The Managing Director of the Imo State Oil Producing Areas Development Commission (ISOPADEC), Engr. Anthony Okwuosha, has called on the workers of the commission to cooperate with the new management and board to enable them deliver on their set targets.

This is contained in a statement signed by Mr.Collins Ughalla, Special Assistant, Media and Communications to the MD.

He disclosed this on Wednesday when the leadership of the organized labor at the Commission visited him in his office.

Responding, the Managing Director said that Governor Emeka Ihedioha was in a hurry to address the challenges faced by the people of the oil producing communities in the state, saying that the cooperation of the union and the entire workers was needed to achieve the objectives of the state government for the oil producing communities that had been neglected in the last eight years.

He assured that the issues of welfare raised by the Chairman of the organized labour were been addressed and that soon the affected workers would smile.

While assuring the workers that the new team is committed to serving the people, he called on them to share in their vision and eschew selfishness in the execution of their duties.

“We are here to serve our people. The welfare of the workers is also important to us. We have discussed the issues of workers’ welfare which we inherited. They are being addressed and very soon the affected workers will smile.

“The government is in a hurry to address the challenges in our rural communities but we cannot achieve much without the commitment of the workers. Workers must share in our vision if we must change the condition of things in the rural communities where we come from.

“No matter what we do, our mandate is to serve the people and we cannot serve them when we are selfish. We should think less about ourselves and think more of others. By the time we think less of ourselves and more of others we will be able to serve the people with greater commitment. The impact will be tremendous and it will help in tackling the security issues we have in the rural communities”, he said.

What I Want From Iheanacho- Leicester City Coach

innonews - December 22, 2017 0
Leicester City Manager, Claude Puel has opened up on what he wants from Nigeria tennage striker, Kelechi Iheanacho. The Nigerian was in superb form for...

Ohaneze Presidency: Ex Minister May Take Over From Nwodo

innonews - December 31, 2019 0
BY KELECHI ONWUDIWE Baring last minute changes, a former Minister of the Federal Republic of Nigeria from Imo...

innonews - July 10, 2018 0
Real Madrid on Tuesday confirmed the transfer of Cristiano Ronaldo to Italy’s Juventus, with the Portuguese superstar saying the time had come “for a...

innonews - December 1, 2017 0
Aristotle in his Nicomachean Ethics, defined crime as the act of free will stimulated by desire. This means that for a crime to be...