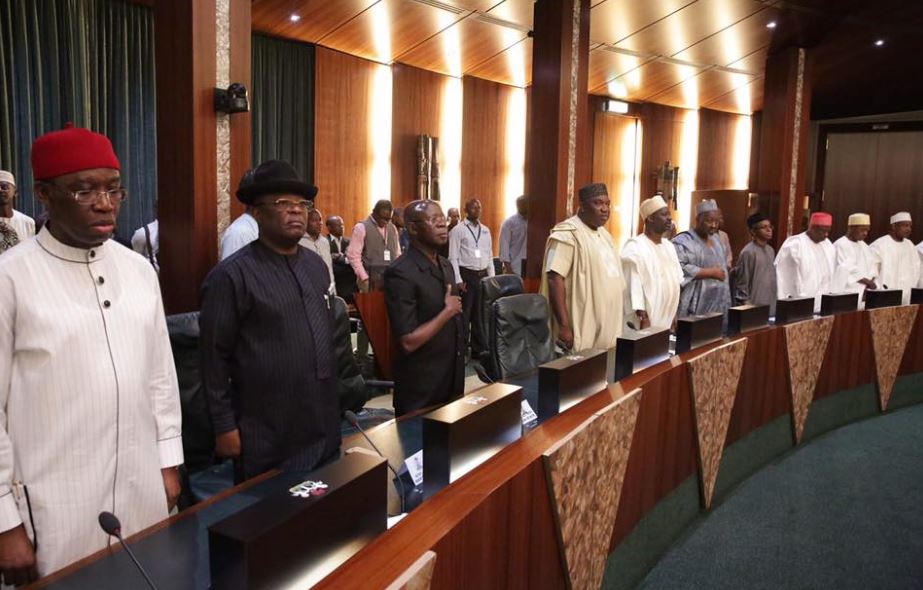 State governors have enjoined the Federal Government to recruit more Police personnel in addition to the ongoing 10,000 police recruitment exercise to check insecurity in the country.

The Chairman of Nigeria Governors Forum (NGF) and Gov. of Ekiti, Dr Kayode Fayemi made this known at the end of a closed-door meeting with President Muhammadu Buhari at the State House, Abuja, on Friday, NAN reports.

He disclosed that he briefed the President on the outcome of the security committee of the National Economic Council, adding that the committee reviewed security challenges facing the nation.

According to him, the Federal Government and the NGF have proposed to recruit N-Power cadets whose two-year service will soon come to an end or youth corps members or any of the other institutions to boost the manpower of the Nigeria Police Force.

He said both parties felt the recruitment of 10,000 policemen to tackle the dearth of security agents in the country was inadequate.

”As you may be aware, certain recruitments are going on now particularly with regard to the police.

”But, we feel in our humble opinion that 10,000 men and women are not enough to add to the police in tackling the dearth of security agents in the country.

”That we will have to figure out a way to increase that number either out of the NPower cadets who are coming to the end of their service year having spent two years or youth service corps members or any of the other institutions that will enable us to boost the manpower of the Nigerian police force,” he said.

Fayemi revealed that Buhari expressed satisfaction with the efforts of the governors to tackle the security challenges in their respective states.

The governor said: ”He (President Buhari) commended the National Economic Council (NEC) for paying special attention to security and he also urged the NEC committee to work with the security chiefs who have already briefed him during the security meeting yesterday (Thursday).

“Mr President also said that jointly we should workout the detailed modalities for the suggested date so that it can be drafted into a plan of action.”

APC Will Not Surrender Power To PDP- Uche Nwosu

innonews - November 15, 2017 0
Chief of Staff, Government House, Owerri, Chief Uche Nwosu has said the All Progressive Congress, APC is not ready to surrender power to the...

innonews - March 31, 2022 0
The Imo State House of Assembly (IMHA) has condemned the fine imposed on 266 Secondary Schools in Imo State for alleged malpractice.

‘Second Lockdown Will Reduce Spread Of Covid 19 In Imo’,Group Tells...

innonews - June 28, 2020 0
Following the revelation by the Imo State Task Force on Covid 19 on the increasing rate of confirmed coronavirus cases in...