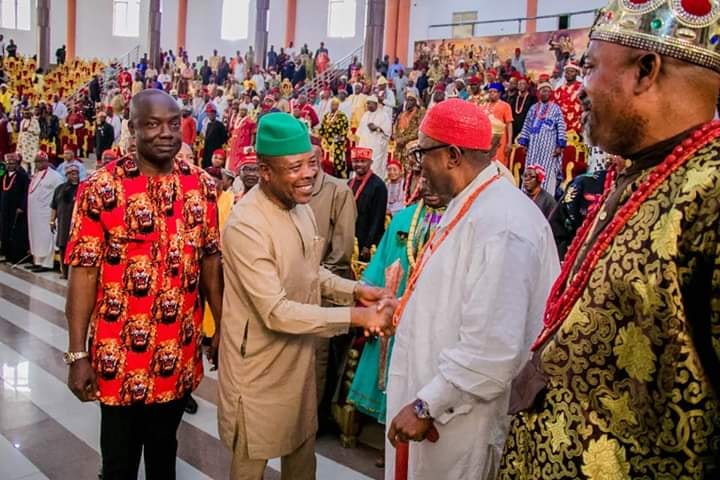 Three major things stood out from the maiden enlarged Imo state stakeholders meeting held on Thursday, July 18, 2019. The first is the attendance. The second, which is intertwined with the first, is that it was a refreshing departure from what the good people of Imo state had become used to for eight years. The third is the content and significance of the meeting.

On the first score, the attendance of the critical stakeholders, made an eloquent statement: Imolites have in unison decided to be on the same page with their governor, His Excellency, Rt. Hon. Emeka Ihedioha CON. Apart from the volume, it was a gathering of the crème de la crème in Imo state.

Interestingly, aside the senior citizens, the youths showed more enthusiasm: The not-too-young-to-run, top professionals, the clergy, traditional rulers, serving and retired civil servants, heads of security agencies, labour unions, media practitioners, women professionals, women politicians. There were also in attendance, artisans, market women, cab drivers who drove their vehicles to the venue, etc. This brings us to the second plank: The difference between the event of last Thursday and what used to be the case. For the first time in eight years, no market was closed for the event, yet representatives of market women and their male counterparts thronged the venue.

Overall, the attendance further demonstrated that Imolites in general are ready to fill up the void following the opening up of the political space since the advent of the Ihedioha administration. The first sign was at the inauguration lecture on May 28, 2019 held at the same venue, the Ahiajoku centre.

Now, to the third factor; the significance of the meeting lies in its appellation: maiden or first meeting. It was exactly what it was: the first time Imo people were hearing, first hand, from their new governor on the state of affairs in the state; what he met and how the situation is being addressed. There had been press releases and newspaper commentaries by the governor’s aides, or the governor himself might have said things to some groups or sections of the Imo society at one forum or the other. |But the event of July 18, 2019 was different because it was a pan Imo gathering, cutting across age, class and political leaning. Perhaps the significance of the occasion is best understood in the governor’s own language:

“This is my first enlarged stakeholders meeting since I was sworn in as governor … Today’s event is in keeping with our commitment on openness and communication with you to regularly bring you to date with happenings in the administration particularly the journey so far and some of our plans and challenges going forward… We consider it of utmost importance to lay before you the facts we have met on ground and the enormous efforts required to address them. This is necessary in order to keep the records straight for posterity…”

The maiden enlarged stakeholders meeting came against the backdrop of certain information there were already in the domain of members of the public concerning the state of affairs before May 29, 2019.

Naturally, there was the tendency in some quarters to think that some of the information were exaggerated or arrived at hastily. But after 48 days in office, Imolites can take what they heard on July 18 2019 to the bank; coming from a leader who had been tested and found to be one not given to frivolities.

For example, though it was already public knowledge that the state was in a procedural and financial morass as at May 29, 2019, the July 18 2019 forum was the first no-holders-bared revelation from the very one that currently holds the mandate of the people to preside their affairs for the next four years. If some people thought that some of the things they heard earlier were a rumour, they certainly got every shade of doubts erased in their minds. But the more important thing is that His Excellency made the formal disclosures taking full cognizance of the fact that he would be held responsible for every word of his. What that means is that Imolites heard at the forum, things that would enable them make up their minds on how best to approach the collective effort at making life more meaningful for themselves.

Again, listen to His Excellency: “When we were campaigning, we honestly underestimated the quantum of rot in the state and the deep corruption and mindless misappropriation, perpetuated by the last administration. Contracts were most times awarded orally and without documentation, no paper trail, without the inputs of relevant government ministries, departments and agencies”.

Now, this is not the first time Imo people are hearing of contracts awarded without documentation but the difference is that it is coming from the governor who has searched through the seat of government and found it to be so. In other words, what the governor was telling the people was: If you discover it is otherwise, hold me responsible. Politics or no politics, it is not a type of courage that can be found everywhere. Or take the case of looting. Again, said the governor to Ndi Imo: “Our interim findings show a consistent pattern of massive looting and stripping of public assets, dismantling and carting away of public property such as electric poles, vehicles, office equipment and furniture etc.” The governor further disclosed that, “there were last minute illegal sale of public property at give away prices and unlawful allocation of land including back dating of Certificates of Occupant; instances of mindless withdrawing of cash from government accounts in commercial banks without due process…”

These are serious disclosures and which no leader who knows his onions can make just for the sake of “playing politics”. More importantly, His Excellency was telling the people thus: You will not get this type of thing from me at the end of my stewardship. Little wonder he was quick to add that the disclosures were made not just to keep the records straight but “for the purpose of making our leaders accountable”.

As expected, some critics have gone to town with the hackneyed argument that the governor should not “lament the past”, but should go ahead to take measures towards making the life of the people better. But the governor already had two-pronged response to that. First, he noted that “… the depth of decay has strengthened our resolve to keep our promise to rebuild Imo and restore its former glory”. Second, His Excellency told the people as follows: “Yes, we have inherited monumental rot from the immediate past administration but the reason we convened this meeting is not to bemoan the unfortunate situation, but tell you the steps that we have taken in the last few weeks to reroute the state to the path of progress”. He didn’t stop there. He gave the people the assurance that “we shall indeed overcome”.

The governor then went ahead to reveal that his administration has decided to adopt “innovative approaches to reflate and grow the economy”. These steps include, maximize accessing of support from development partners particularly to fund health, water, sanitation and education; maximize accessing of resources from intervention funds of the Central Bank of Nigeria, Bank of Industry and Development Bank of Nigeria to stimulate small and medium scale enterprises and create employment; maximize activation of private sector investment (local and foreign) to stimulate economic growth, employment and poverty reduction while expanding the frontiers for Internally Generated Revenue through relevant taxes and fees.

Still, the point ought to be reiterated that the allusion to dwelling in the past by some critics is a platitude, even cheap. The question to ask is; which people would sweep the type of things Ndi Imo have discovered under the carpet and pretend to be “moving ahead”? It is not about the governor or the government itself but about an entire people and their collective future. Of course, no true Imolite would quarrel with the disclosures, because to do so is to accept that we should remain where we were in the last eight years.

The Governor could have disappointed quite a lot of Imolites if he had pretended to be a genius or a miracle worker by not first letting the people become aware of the constraints he is faced with and then seeking their, patience, support and understanding. Contrary to the views expressed by such critics, what His Excellency did by his disclosures is to say: My brethren, this is the situation, what do we do? In other words, if the people must give their support, they should know the true state of affairs of their state.

Instructively, His Excellency told the gathering that the expanded stakeholders meeting will be a regular feature of his administration not only at the state level but also at local government level.

Onyeukwu is Chief Press Secretary to the Governor of Imo State

“As expected, some critics have gone to town with the hackneyed argument that the governor should not “lament the past”, but should go ahead to take measures towards making the life of the people better. But the governor already had two-pronged response to that. First, he noted that “… the depth of decay has strengthened our resolve to keep our promise to rebuild Imo and restore its former glory”. Second, His Excellency told the people as follows: “Yes, we have inherited monumental rot from the immediate past administration but the reason we convened this meeting is not to bemoan the unfortunate situation, but tell you the steps that we have taken in the last few weeks to reroute the state to the path of progress”. He didn’t stop there. He gave the people the assurance that “we shall indeed overcome”.

innonews - October 9, 2018 0
*Ohakim Set To Announce Next Political Move* The disarray in the All Progressive Grand Alliance, APGA in Imo State has continued unabated since Senator Ifeanyi...