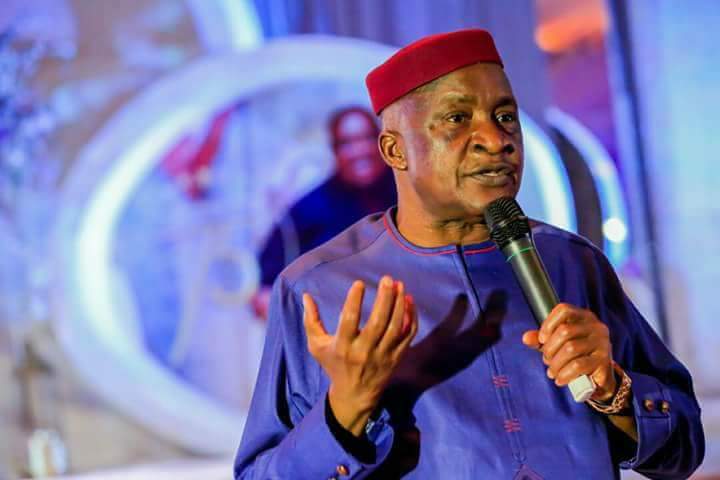 The absence of former Governor of Imo State, Achike Udenwa at State functions since the coming on board of the present Emeka Ihedioha administration has generated concern.

Mr.Udenwa was conspicuously missing at the State of the State address delivered by Governor Ihedioha at Ahiajoku centre, Owerri

The opposition contend that he has been absent at such functions because he is not happy with the marginalisation of Orlu zone over appointments made by the present administration.

But Dr.Vin Udokwu, former Chief of Staff to Udenwa when he was Governor countered the allegations.

He said ” let no body be confused and misled by the false reports making the rounds about the edging out of Chief Achike Udenwa and formidable his political structure.

” It is therefore, preposterous, mischievous and even treacherous for anybody to insinuate speculatively that Chief Achike Udenwa and his political structure has been sidelined or sidetracked in the emergent and evolving plans and programmes of the Ihedioha administration.

” Chief Achike totally supports the inclusive government policy decision of the Ihedioha administration. He would therefore, not expect the government to violate that decision by appointing only his followers into the government. So far, so good, Chief Achike Udenwa is very satisfied with the appointments made by Governor Ihedioha” Mr. Udokwu wrote

This newspaper gathered that the former Governor has been out of the country lately and this explains his absence at such functions.

innonews - March 8, 2018 0
The newly elected Chairman of the National League of Veteran Journalists of Nigeria, Imo State Chapter, Nze Louis Onwunali, has promised to take the...

Morrocan Coach Speaks After Round of 16 Loss To Benin

innonews - July 6, 2019 0
Morrocan Coach, Herve Renard, has said despite his side having high expectations of making it to AFCON 2019 Quarter finals, his team...

innonews - November 26, 2017 0
By: ONYENWE PRINCELY In the good efforts of Imo state government under the first-rate leadership of his Excellency Governor Rochas Okorocha to sanitize our rural...

innonews - July 31, 2021 0
Former Imo State governor, Senator Rochas Okorocha, has again raised speculations that he and his political allies may be exiting from the...