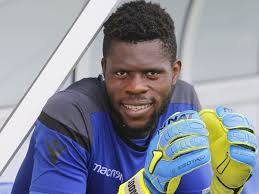 They had reached an agreement for a loan for the Nigerian for the entire 2019- 2020 season.

The goalkeeper had played for the first and reserve teams of Deportivo La Coruna and had an unsuccessful loan spell at Anorthosis Famagusta during the second half of last season.

He was caught in a health certificate scandal shortly after he joined Anorthosis Famagusta on loan and as a result he played only two official matches for the club.

Uzoho is now number three in the pecking order of goalkeepers in Gernot Rohr’s team due to his inactivity for his clubs in 2019.

He was on loan at Elche In the first half of the 2018-2019 campaign where he posted three shutouts in 8 matches while conceding 11 goals.

innonews - March 7, 2018 0
I want to start this piece with an unbiased mindset and with the view to steer the consciousness of the reading public in Imo...

innonews - October 19, 2017 0
By CHUKWUDI SOPURUCHI# Hunger and thirst have really turned many into what ordinarily they would not have become; they have enslaved themselves into what they...

innonews - July 2, 2022 0
Cristiano Ronaldo could be on his way out of Manchester United, if a satisfactory offer comes his way. The...

Mike Nwachukwu Hails Uzodinma, Advises Imo Gov What To Do