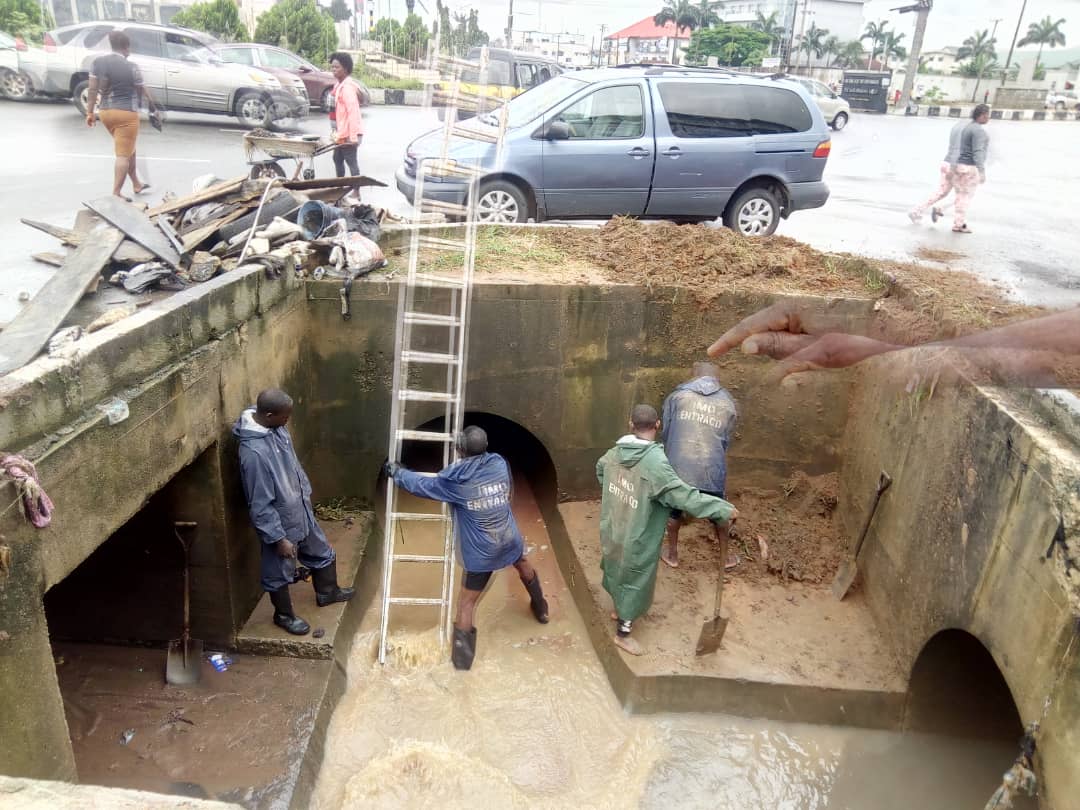 The Imo State Environmental Transformation Commission (ENTRACO) headed by the Special Adviser to the governor on Sanitation Hon Alex Emeziem has commenced the de-silting of blocked water tunnels occasioned by Okorocha’s urban renewal projects in the state capital, Owerri.

Hon Emeziem who defiled the early rains on Friday with his team of ENTRACO officials jumped into the blocked tunnels at Okigwe Rd Roundabout from where canopies, planks, rods, pipes, sands, gravels and other construction equipments and materials which apparently were left behind by construction companies that handled the urban renewal projects of immediate past administration.

The former Governor of Imo State Senator Rochas Okorocha had embarked on what he described as urban renewal and road expansion within the state capital, leading to closure of duely constructed tunnels more than eight years ago.

Consequently, flood at the state capital Owerri has remained a worrisome development, disrupting vehicular and human traffic at any slightest rainfall.

Meanwhile, the ENTRACO General Manager and his team has opened other blocked tunnels located at Jacob Zuma road, Asumpta Cathedral and Control Post Roundabout and many other areas within the state capital.

Addressing Journalists in Owerri, the General Manager ENTRACO Hon Alex Emeziem said that opening of tunnels and de-silting of gutters is a continuous process and vowed to find permanent solution to the menace of flood within the state capital and other parts of Imo State.

However, the agency has de-silted gutters at Ikenegbu Layout, some parts of Aladinma Housing Estate. It had what was described as the best outing during the monthly environmental clean up exercise which was also monitored by the Governor of Imo State RT Hon Emeka Ihedioha, former Governor of the state Ikedi Ohakim, commissioner of police, Brigade Commander of 32 Artillery Brigade and other notable agencies of government.

Okorocha: I M Not Campaigning For Uche Nwosu For 2023 Guber