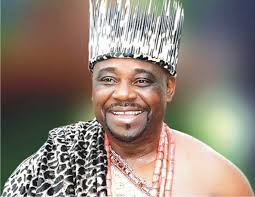 Chairman of Imo State Council of Traditional Rulers, Eze Sam Ohiri, who ascended as leader of the Council during the reign of former Governor Rochas Okorocha has cautioned the latter.

Ohiri is embroiled in a rat race to retain chairmanship of the Council with former Chairman of the Council, Eze Cletus Illomuanya.

One of the grouse held against Ohiri since Ihedioha emerged Governor was that he backed Okorocha’s bid to have his son in law, Uche Nwosu take over from him as successor.

But Ohiri has stated that the position he holds is derived from his ongoing tenure which is yet to elapse.

His adversary, Ilomuanya will hear none of that, saying he was sacked as Chairman of the Council by Okorocha when his tenure was yet to elapse and despite several Court Orders for him to be reinstated, Okorocha never bulged but aided Ohiri’s stay as Chairman of the Traditional Rulers in the State.

Ohiri on Tuesday at a news conference spoke on behalf of the Traditional Rulers in the State where they took on Okorocha. He blew hot and cautioned Okorocha to leave Governor Emeka Ihedioha alone.

Ohiri said there can never be two Governors at a time saying anyone that holds the Peoples mandate should be given the free hands to operate.

” It is not proper for the government to be distracted for peace to reign. Okorocha should respect himself now he is a Senator.

” We worked for him for 8 years and this Recovery Committee team issue never started with this government neither will it stop, any one who is still in custody of any government property should relinquish it to the committee without further delay

” We will not condone the attitude of inciting your supporters to fight the government, Senator Okorocha is not the only living ex Governor of Imo State if he has advice for the Governor he should do it in a civilized manner rather than causing public nuisance

” If he wants to come back to the State, it should be done quietly and casually not by causing uproar or riding like a Pharaoh, this same issue he did not tolerate when he was in power.