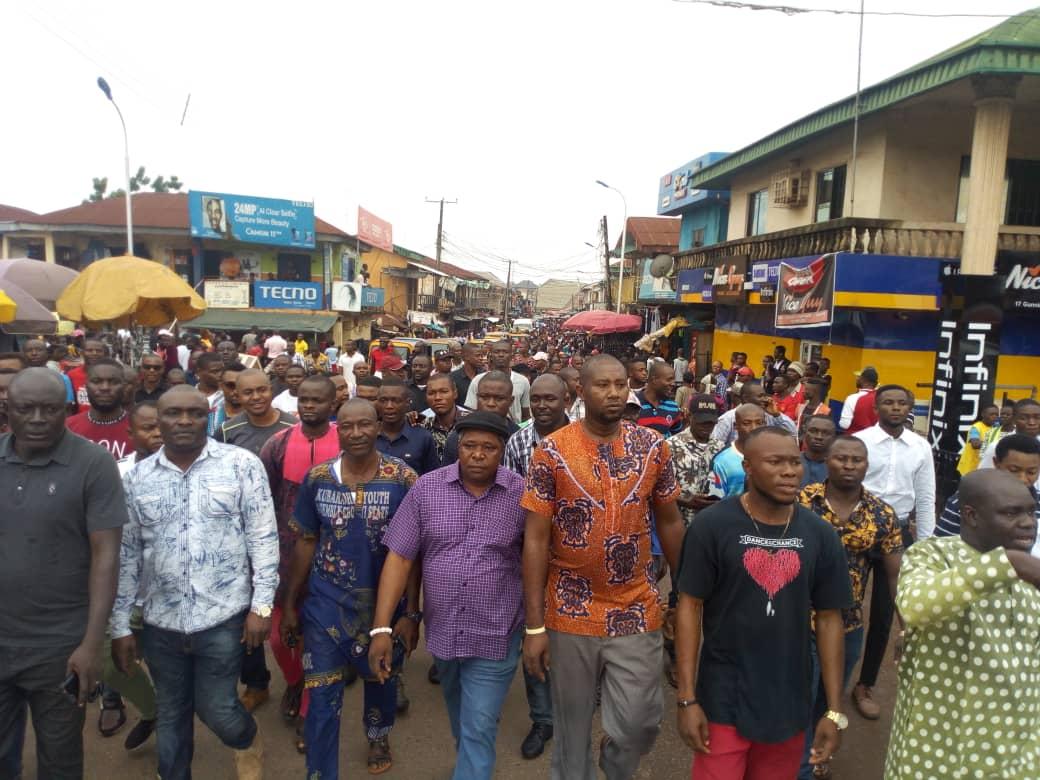 There was pandemonium in Abakaliki today as traders at the Abakpa main market, Abakaliki clashed with revenue officials of Ebonyi state government over Internally Generated Revenue (IGR) which one person were allegedly feared dead

Our correspondent gathered that trouble started when the Special Adviser to Governor David Umahi on IGR, Martins Ukwuegbu and the Commissioner for Internal Security and Border Peace, Stanley Emegha led some youths to collect the IGR from some traders in the market.

Our sources alleged that the ‘revenue collectors were using the IGR collection as cover to close down the shops of some traders who took the state government to court over the leadership dispute in the market.

According to him, the traders had gone to court to challenge the removal of the market leadership before the expiration of their tenure and imposition of a new interim leadership on them by the state government.

“They came to the market and were taken to the shops of the traders that took them to court and they started closing their shops accusing them of not paying IGR”.

”One of the sons of one of the traders entered into an altercation with them and in the process, a fight broke out”.

It was gathered that the traders immediately mobilized and attacked the IGR team and beat some of them up while others escaped.

Not done, the traders began rioting. They went to the shop of one of the leaders believed to be working with the government and attempted to vandalize it when Police arrived and chased them away.

The Police tear-gassed many of them to disperse them and arrested many others.

Meanwhile, Ebonyi State Police Command has denied viral media reports alleging a loss of lives during the clash between traders in Abakpa Market and some tax agents of the Ebonyi State government.

According to the command’s spokesman, Loveth Odaah, she said only one trader sustained an injury on the head and was immediately rushed to the Federal Teaching Hospital Abakaliki for treatment.

Also speaking the Commissioner for Internal Security, Stanley Emegha and Special Assistant to Governor on Market Development, Hon Keran Ofoke denied that anyone was killed.

They noted that there in company of the Special Assistant on IGR, Martin’s
Okwuegbu went to the market to seal some shops.

According to them, some shops were sealed for various reasons ranging
from refusal to pay IGR to the shops being used for criminal
activities in the market.

On his part Okwuegbu, SA on IGR said about seven shops were sealed for not paying their taxes.

He denied knowledge of any fracas or death adding that the exercise
was peaceful.

“We sealed the shops and left peacefully. I am just hearing from you
that someone died. Nothing like that happened while we were there”, he
said.

Mr Okwuegbu denied that the exercise was used to victimise some
traders opposed to the government action on the market leadership.

“We served them notice to pay three times before going to seal their
shops. If anyone says he or she has paid let them come and present
their records and we will immediately open the shops”, he said

innonews - August 4, 2020 0
The Peoples Democratic Party, PDP, in Imo State, has never hidden its desire to reclaim power from the All Progressive Congress, APC...

innonews - March 24, 2018 0
The Imo State chairman of All Grand Alliance Party (AGAP) Imo State, Chief Ugo C. Ugo has stated that his party the All Grand...