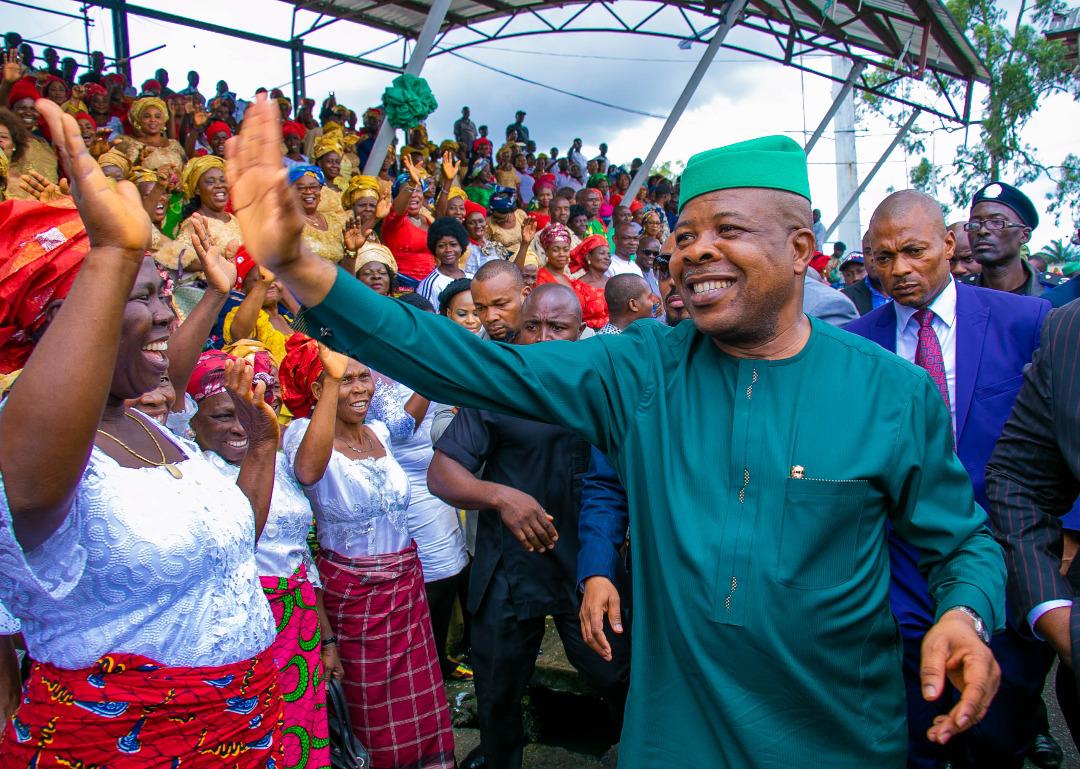 Imo State Governor, Hon.Emeka Ihedioha, CON, has said his administration remains unwavered in the task of rebuilding the State from years of ruins and neglect it was plunged into by the last administration.

In his address on the occasion of his 100 days in office, Governor Ihedioha narrated his administration’s impressive achievements in various sectors of the economy of the State.

According to a statement signed by the Governor’s Chief Press Secretary, Mr.Chibuike Onyeukwu, Governor Ihedioha said the Imo Growth and Strategic Development Agenda plan (G-SDP), a two stage development horizon of a 5 year Economic blueprint conceived by the Transition Technical Commitee provided the roadmap for the overall economic growth and development of the State which include among other things the delivery of 381km rural access road projects, restoration of an improved Owerri masterplan, restoration of water supply in Owerri metropolis, roll out of a State health Insurance scheme as well as the reactivation of four technical education institutions in the State.

The Governor stated that others include an economic growth and Strategic development with emphasis on human capital development, Agriculture and food security, infrastructure, industrialization and job creation as well as security and environment.

Governor Ihedioha said within 100 days in office, the State Internal Generated Revenue, IGR, increased from all time low of about 300m in July to 600m in August.

He said this was as a result of transparency and accountability in the governance process with the signing into law, Executive Order 005 known as Treasury Single Account which consolidated all government revenues under one account.

He said Imo State is now on track to join open Governance partnership which now qualifies it for performance based grants of the World Bank and other multinational development institutions.

In the area of roads which has been in poor condition for many years, Governor Ihedioha said 14 critical roads are undergoing reconstruction while the Rural Access and Mobility Projects involves 70 Rural Roads network with a cumulative distance of 381 kilometres across 27 Local Governments.

He said security has also received great attention in the last 100 days with the kick off of Operation Iron Gate designed to combat crime and criminality and rid the State of all undesirable elements.

In the health sector, the Governor said the stalled Health Insurance Scheme has been relaunched in the State to connect into already existing Federal Government Insurance Scheme.

On the perennial power problems affecting the State, Governor Ihedioha said the Imo State Power and Rural Electrification Agency (I- POREA) has been constituted to evolve strategies to remove barriers to adequate exploitation of the power generation potentials in the State.

He said his administration has made remarkable progress towards the restoration of electricity supply to some areas of the State where it was non existent for many years.

He said 79 failed transformers across the State have been replaced and electricity supply restored to Inyishi Aluminum Extrusion Company and it’s environs as well as the completion of Oguta 33kv line electricity project.

He said water supply which has been lacking for many years in the State has been restored with the revitalisation of the Otammiri Water supply.

He also revealed plans by his administration to provide 5000 affordable homes by 2023 by going into partnership with some reputable primary mortgage institutions.

He reiterated the commitment of his administration to an agricultural roadmap which has been conceived by his Administration and which represents a comprehensive framework for self sufficiency in food production both for domestic consumption and for exports purposes.

The Governor said 500 youths from the 27 local governments of the State have been sent to Nassarawa State under the Imo Youths Agricultural Programme (IYAP).

He said experts in rice brewing and processing from the Africa Rice Centre at IITA Ibadan will train young rural farmers in the State to grow and process improved rice seeds.

He said the Avutu poultry farm is on the verge of being restored to a world class standard while ADAPALM will soon commence operations.

Governor Ihedioha revealed that the State is set to host the only Agribusiness park in Nigeria at Ngor Okpala Local Government Area of the State.

In the area of sports development , he said the Dan Anyiam stadium is being re-grassed after many years of neglect while installation of new flood lights, replacing the seats and constructing Olympic standard tartan tracks is underway.

He said the Grasshopper International Handball stadium, Owerri will also begin to wear a new look while the local councils have joined the the talent hunt programme of the State Government through construction of sporting facilities in their respective local governments.

Governor Ihedioha announced that as part of his government’s determination to improve on ease of doing business in the State, the Imo State Enabling Business Environment Council, ISEBEC, would be inaugurated which will compliment the revamped Imo State Government Bureau of Public Procurements and Price Intelligence.

He explained that the ongoing pension verification is aimed at ending the perennial cycle of verification that has plagued the process for a long period.

He said the State Government has achieved a lot in the area of sanitation by reviving the monthly clean up exercise while remarkable progress has been made in the education sector.

He expressed hope that by 2020 the State would hit 60 percent mark of post Basic students as enrollees in the TVET system.

innonews - August 21, 2018 0
The All Progressive Congress, APC in Imo State looks pretty good to sweep the August 25, 2018 Local Government election in the State. The APC...