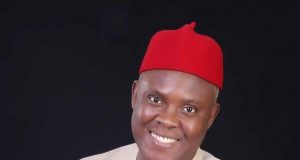 The member representing Mbaitoli/Ikeduru Federal Constituency in the House of Representatives, Hon Henry Nwawuba, has described the affirmation of Governor Emeka Ihedioha by the Election Petition Tribunal, as an affirmation of his victory in the governorship election

In a statement, the lawmaker said “ the authenticity of the Governor’s election has never been in doubt except in the minds of those whose sworn mission is to hold down and arrest the development of the State.

“The unanimous dismissal of the frivolous petitions once more re confirms the mandate freely given to the Governor to salvage the State from the abyss of destruction it was plunged into by one of the most backward eras in our history.

“Today, we celebrate the rebirth of an Imo State that is thoroughly re-engineered and re-positioned to work for all. Never again shall our State be administered like a conquered fiefdom for the exclusive benefit of a few.

“I can confirm that Imo State under the Rt Hon Emeka Ihedioha has rediscovered its energy and its industry and is once more poised to take its pride of place as the epicenter of knowledge, industry and development in Nigeria.

“I wish to appeal to all the litigants to sheath their swords and join hands with the Governor for sake of a state that has been battered almost beyond recognition .

“Let us rally round our new symbol of hope for a greater Imo.

innonews - December 21, 2017 0
Noticeable long queues were observed at filing stations in Owerri as prices of feul rose above N200 naria a litre. For two days running, the...