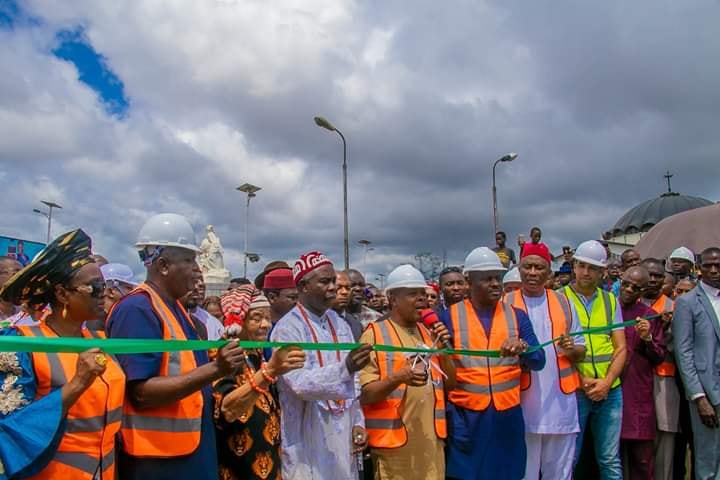 In what appears to be the biggest “roads revolution” in Imo State, Governor Emeka Ihedioha has flagged off the construction of 81km urban roads project worth N23.4 billion in the State.

This is in fulfillment of his promise to address the dilapidated infrastructure in the state, with the core objective to ensuring economic development in the state

Mr. Chibuike Onyeukwu, Chief Press Secretary to the Governor in a statement in Owerri said “this is as the Governor has promised that his administration would not consider geographical divisions while addressing the developmental needs of the state.

According to the statement “The Governor who spoke while performing the flag-off of the projects on Thursday, said part of his administration’s cardinal agenda is to run a one-stop state, where democracy dividends will be evenly distributed across the 27 local government areas of the state.

“Today we are commencing construction of urban roads and comprehensive roads rehabilitation across the state to address the sorry state of our roads. We have tried to provide palliative measures on the roads ranging from the desilting of drainages to address the perennial flooding to filling the failed portions.

“We have deliberately chosen state roads while we have also commenced discussion with the federal government for the federal roads including Owerri/Orlu/Akokwa Road,” he said

He continued, “In order to ensure that a good job is done and to guarantee the durability of the project, painstaking processes were observed. The process of getting to this point was transparent and followed due process. All these were done to ensure not just quality assurance but value for money.

“It is significant again that we are flagging off this project in Orlu Zone. We are running a one stop state. For us all, Imo belongs to Imo people and geographical divisions have nothing to do with our unity as a people.”

He also assured that the construction of both the government technical colleges, and the stadium would meet the international standards to boast technical education and sports development in the state.

The Governor also charged the contractors handling the projects to deliver to specifications and guarantee their durability, pointing out that his administration is committed to providing durable projects.

The Governor had recently flagged off the the rehabilitation of 381 km rural roads across the local governement areas in the state, through the Rural Access Mobility Project 2(RAMP2) worth N13.5 billion.

Speaking at the flag-off of the Assumpta roundabout – Port Harcourt road project, the Archbishop of the Catholic Archdiocese of Owerri, His Grace, Most Rev. Anthony Obinna commended the governor for his achievements and urged him to ensure that the projects are supervised for quality delivery.

innonews - August 2, 2018 0
Governor Rochas Okorocha of Imo State has been criticized for always finding fault with his Deputies. Speaking on the impeachment of Prince Eze Madumere by...

innonews - January 11, 2018 0
Political leaders in Okigwe zone have opted for the Peoples Democratic Party as a vehicle to realize the zone's quest to occupy Government House,...