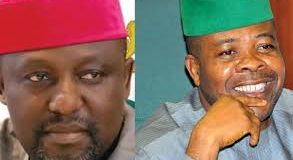 Imo State Governor, Emeka Ihedioha, has said he will not interfere in ongoing investigations by relevant agencies against his predecessor, former Governor of the State, Rochas Okorocha.

Okorocha is under investigation by the Economic and Fianacial Crimes Commission, EFCC.

In a statement signed by Mr.Chibuike Onyeukwu, Chief Press Secretary to the Governor, he said he will abide and lead Imo State in the established democratic principles as enshrined in the laws of the land.

Ihedioha said he is conscious of the hate campaign against him.

“As a government, we are also conscious of the hate campaign against Governor Emeka Ihedioha, including but not limited to malicious allegation that he ordered the arrest of a citizen, the former Governor of the State, Rochas Okorocha

“Nothing can be further from the truth. The Governor, who has a distinguished career and concluded his legislative assignment as a Presiding Officer of the House of Representatives, has also built an enduring reputation for rule of law and the independence of the different arms of government”

Governor Ihedioha thanked the people of Imo State for keeping faith with his administration and believing in “our government to deliver on our promise to rebuild the State.

He promised that his administration will remain focused despite the provocations.

” However, we wish to calm frayed nerves and reassure the people of Imo State that despite all provocations and disruptive actions of a disruptive minority, we shall remain focused on our agenda anchored on good governance, rule of law, human capital development, and integrated infrastrutural development.