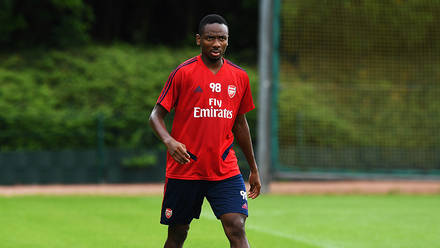 The Nigerian has left English premier side, Arsenal

He joins the Spanish Segunda Division side, in a permanent deal

Part of the statement read: “The Nigeria international joined us in 2016 after captaining his country at the 2015 Under-17 World Cup, where he won the Golden Ball as the tournament’s best player.

“Kelechi spent the first half of the 2017/18 season on loan at VVV Venlo in the Eredivisie, before joining MW Maastricht. During these two loan spells he made 30 appearances. Last season, he spent time on loan with Porto in the Portuguese Premiera Liga.

“We would like to wish Kelechi all the best for the future.

“The deal is subject to the completion of regulatory processes.”

innonews - November 18, 2020 0
The All Progressive Congress, APC, seems divided over the candidature of Senator Ifeanyi Araraume, as candidate of the party for Imo North...

Makarfi: Defecting PDP Members Will Not Benefit From No Victor, No...

innonews - July 21, 2017 0
PDP members defecting to other political parties after the Supreme Court verdict will not benefit from the "No Victor, No Vanquished policy"of the party. National...

innonews - October 21, 2018 0
*As Tension Grip Okorocha, Hope Uzodinma Camps* BY RALPH EJIMKONYE There are ticking time bombs in both the Peoples Democratic Party and All Progressive Congress, APC...