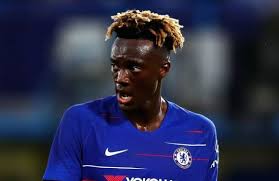 Pinnick said that Abraham could pick up from where Odion Ighalo stopped with the Super Eagles.

Ighalo retired from international football immediately after the African Cup of Nations in Egypt.

The NFF boss had made efforts to lure the former England U-21 star to swear the green-white-green prior to the 2019 Africa Cup of Nations.

“But like you know, these kids are very independent-minded. In fact, we have been told to wait until April 2020, when he hopes to make a final decision on the matter.

“I told him that he stood a better chance of playing regularly for Nigeria than with England, which has a galaxy of strikers of the English stock.”

The Nigerian born striker has scored four goals for Chelsea in 3 matches so far.