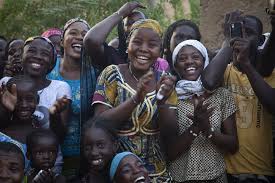 Owerri, Oct. 28, 2019: The Westminster Foundation for Democracy (WFD) and European Union-Support to Democratic Governance in Nigeria(EU-SDGN) have called for increased participation of women, youths and the marginalised groups in electoral process in Nigeria.

The Country Representative of the Foundation, Mr Adebowale Olorunmola made the call at a Refresher Training of Trainers Workshop for NYSC and INEC officials in Imo State held in Owerri on Monday.

Olorunmola, who was represented by Shola Afolayan, Project Manager of the Foundation, said the training was to address issues around electoral participation among women and youths ahead of general elections.

He said to achieve this, the Foundation in partnership with the Nigerian Women’s Trust Fund (NWTF) designed an intervention using targeted peer to peer, civic and voter education to encourage women and youths to participate in electoral process in a meaningful way.

He said that #OurVoteCountsNG is a three-year intervention project funded by the European Union-Support to Democratic Governance in Nigeria(EU-SDGN) and implemented by WFD and NWTF.

“The overall goal is to increase participation of women, youths and other marginalised groups in the electoral process in Nigeria.

“This project will enable women and youths engage members of their own group, develop their interest in the electoral process and enhance their commitment to a representative and inclusive democracy.

“This will set the foundation for a responsible participatory and engaged citizens; the Project is being implemented in the FCT, Imo and Osun states,” he said.

Olorunmola said the project was expected to ensure youth corps members are knowledgeable about the electoral process and able to engage other youths, people with disabilities (PWDs), and other vulnerable groups.

He said it would also enhance women skills to engage in women-to-women civic and voter education training in marginalised communities and ensure media outlets disseminated targeted messages to educate women and youths on political participation.

He said that in less than a year of implementing #OurVoteCountsNG, a lot of achievements had been recorded such as training of 60 experts (Assistant Electoral Officers) to cascade training of NYSC corps members and establishment of voter education CDS group in three states of intervention aside other achievements.

In his key note address, the Imo Resident Electoral Commissioner, Prof. Francis Ezeonu explained that the Voter Education CDS group is an ongoing concern to advance voter enlightenment at the grassroots through a coordinated and rigorous campaign by serving corps members at their primary assignment.

Ezeonu, represented by Mr Sunday Adedoyin, Head, Voter Education and Publicity INEC, said the CDS group is a strategy developed to disseminate information and educate the voting public, at the community level, about the electoral processes and address the lapses witnessed in previous elections.

He commended the Foundation for their active and genuine concern in developing and advancing the democratic culture in Nigeria, and for the deep and avowed effort in making Imo a forerunner in driving an enduring democratic climate.

Ezeonu said the foundation, before the 2019 general elections, had organised training workshops with groups and some serving corps members for voter education and sensitisation.

He said the workshop was to refresh participants memory on efforts on ground for voter sensitisation, examine percieved challenges, explore new frontiers and catalogue them for a roadmap that would enhance a successful outcome of the mandate for the EMB.

“Taking note of the growing cynicism with which citizens and stakeholders view our electoral system and recognising the value of an informed electorate, this workshop must be taken seriously and every participant fully informed and equipped for the task ahead.

“Voter engagement is not another programme, but a valuable tool in a broader set of strategies to build a peaceful and healthy society, give voice to the voiceless and the sidelined and increase the impact and effectiveness of the citizenry to achieve their life goals.

“We should not say elections are over, or next election is four years coming and relax in finding ways and solutions to addressing the lapses of previous elections and conquering the menace of voter apathy,” he said.

The Director International Cooperation Department, Ministry of Budget and National Planning, Mrs Elizabeth Egharevba pointed out that the workshop was aimned at strengthening the INEC and NYSC Desk officers’ capacity on voter education and related activities.

She said voter education ensured that all constituents -men and women alike understood their rights, political system, the contexts they are demanded to decide how and where to vote.

“Therefor, for an election to be successful and democratic, voters must understand their basic rights and responsibilities, and must be sufficiently knowledgeable and well informed to cast ballots that are legally valid and participate meaningfully,” she said.

Egharevba commended the European Union, WFD and NWTF on behalf of the Nigerian Government for their sustained support in complementing government’s efforts to improve and strengthen democracy in Nigeria.

He said the scheme has been going from school to school to sensitize the school management and students on effective democratic process.

Eloeboh expressed regrets that the last general election was fraught with challenges especially on security leading to some corps members being kidnapped and forced to sign election results while others risked their lives.

He, however, assured of NYSC determination to support the success of further elections.

innonews - June 29, 2017 0
Tiemoue Bakayoko is on the verge of joining Chelsea after undergoing medicals with the English Premier League champions. Bakayoko is reported to cost the Blues...

innonews - September 2, 2018 0
The remains of Late Nze Joe Anyama was laid to rest at his country home at Amanator in Ideato South Local Government Area of...