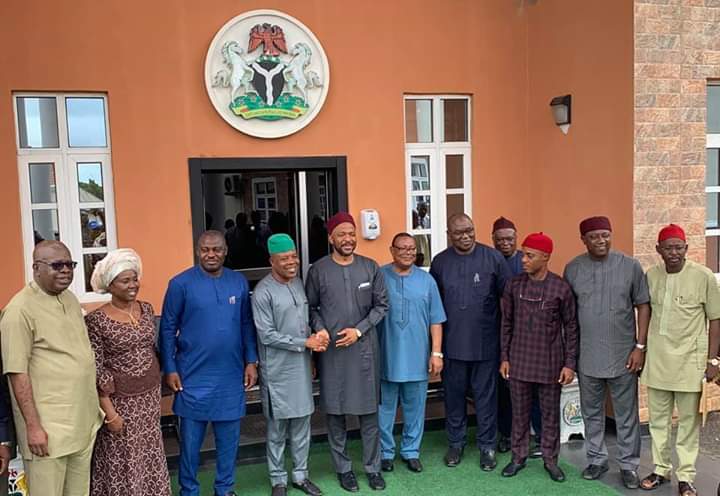 Details surfaced on Saturday revealing steps taken by the Federal and Imo State Governments, to resolve the lingering land crisis between Federal University of Technology, Owerri, and host communities.

The dispute had been a nagging issue for a long period.

Minister of State of Education, Hon.Emeka Nwajiuba led a delegation from the Federal University of Technology, FUTO to Imo State Governor, Hon.Emeka Ihedioha, where talks centered on resolving the dispute.

According to a statement signed by Chibuike Onyeukwu, Chief Press Secretary to the Governor, Ihedioha assured the Federal Government of the commitment of his administration to collaborate with it, to find lasting solution to the lingering land dispute at the Federal University of Technology, Owerri FUTO.

The Governor stated that his commitment to resolving the land dispute is in line with the priority his administration has placed on education and amicable conflict resolution in the State, noting that Imo State is known for its high literacy level in the country.

“We have a common goal in the area of education because education is very important to us in Imo State. We will dialogue with you to achieve the desired results”

He commended President Muhammadu Buhari for appointing Hon. Nwajiuba as a Minister of the Federal Republic of Nigeria.

“On behalf of the people of Imo State, we extend our gratitude to Mr. President for appointing Hon. Nwajiuba as a Minister”, he said.

“Your trajectory from the House of Representatives to your appointment as a Minister is well appreciated by the people of the State. You are a son in whom we are well pleased”

In his opening remarks, the Minister of State for Education, Hon. Emeka Nwajiuba, said the Federal Ministry of Education decided to review its position on the FUTO land issue because of the renewed spirit and commitment demonstrated by the state government to end the lingering dispute.

He disclosed that the peaceful resolution of the dispute is geared towards ensuring academic activities continue at the institution unhindered.

A closed door meeting followed after the courtesy call where issues of encroachment into the land belonging to the university, agitations by the host communities and modalities to finding a lasting solution topped the agenda.

The FUTO delegation was led by the Pro Chancellor and Chairman of the Governing Board, Prof John Ofem; Vice Chancellor of the University, Prof Francis Eze; Registrar, John Nnabuihe, the Public Relations Officer, Mrs. Uche Bright-Nwelue and others.

innonews - April 22, 2022 0
BY ADANNA ONWUKWE Governor Hope Uzodimma, will determine those who will emerge candidates of the All Progressives Congress, APC,...

innonews - May 10, 2020 0
Lawmakers of the Peoples Democratic party in the Imo State House of Assembly may be poised for a showdown, over...

innonews - February 24, 2022 0
Russian forces have unleashed an attack of Ukraine on the orders of Vladimir Putin, who announced a “special military operation” at dawn,...

‘Owerri Zone Under Represented At The Senate’- Nwachukwu

innonews - January 4, 2022 0
BY EVERLYN ANYASADOR In what appears taking a swipe at past Representatives of Owerri zone at the Senate, a...