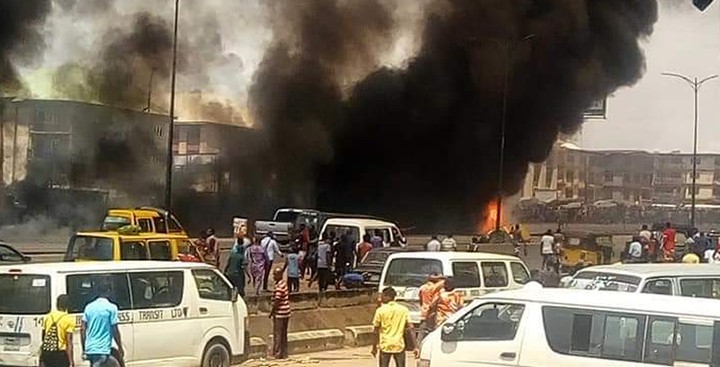 The INC in a statement signed by Mr. Chilos Godsent, President General of the Council and Victor Bieni Emenike, Publicity Secretary, INC, the group gave a summary of what was lost during the tragedy.

It said over “five lives including a woman and her child, destruction of over forty residential houses and over five thousand (5000) shops worth over two hundred billion Naira in less than four hours”.

According to the INC, its “investigation revealed that the inferno was as a result bad spots at upper-Iweka along Onitsha – Owerri road which caused a petrol tanker carrying fuel (PMS) to fall resulting to outburst of fire that destroyed the entire livelihood of over two hundred thousand Nigerians.

“We note that the said bad spots at upper – Iweka along Onitsha – Owerri road cannot cause Anambra State Government more than two million (N2,000,000.00) to repair.

“On the foregoing, the Igbo National Council (INC) therefore call on Governor Willie Obiano to immediately resign as Governor of Anambra State for his arbitrary negligence and gross ineptitude that has caused the Igbo race a monumental colossal and irreparable human, political and economic damage.

“We therefore call on the Anambra State House of Assembly to commence an impeachment process against Gov. Willie Obiano if he fails to voluntarily resign before October 23rd, 2019.

innonews - April 24, 2020 0
The rampaging coronavirus, is taking its toll on the political landscape in Imo State, putting a halt to political gatherings...

innonews - September 27, 2019 0
Following the decision of the Federal Government to commence deduction from the monthly allocation of States, as part of refund for...

innonews - March 17, 2022 0
There was drama at the inauguration of Prof Charles Soludo as Anambra State Governor, on Thursday at Awka, when wife of the...