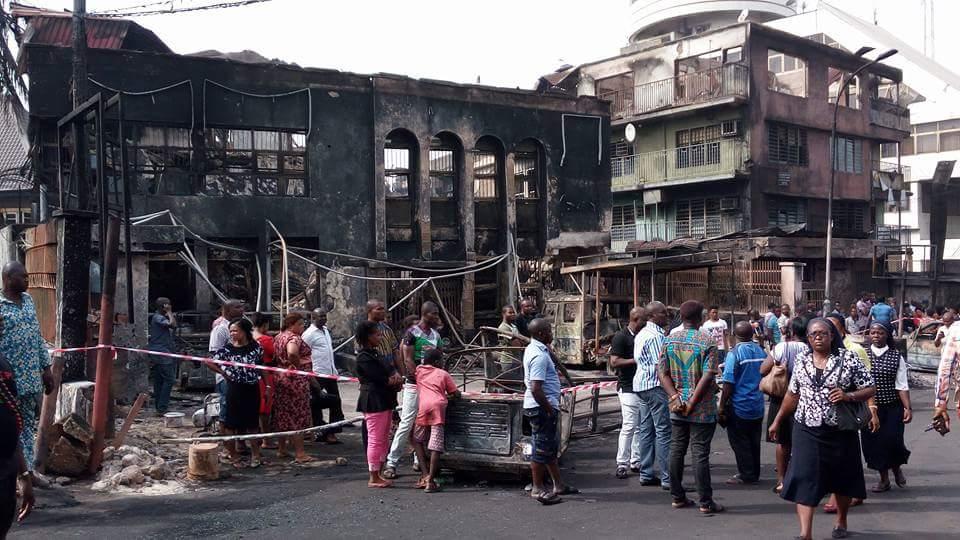 Victims of Onitsha- Ochanja Market fire incident have received relief in the from the apex Igbo socio cultural youth organization in the South East, Igbo Youth Assembly Worldwide, as the body made huge financial donations to them.

The market was engulfed with fire recently after a tanker explosion which led to massive loss of goods of traders at the market.

The group was led on the visit by its President -General, Mazi Ifeanyi Nwaudunna and accompanied by the Treasurer, Gbuefi Nneka and the Igbo Youth Assembly Worldwide, Anambra State chapter Chairman, Barr Ezeife Obiorah and his executive members.

Speaking to newsmen after donating the relief funds Nwaudunna noted that “while we are on tour around the Market to inspect the damage and loss caused by the fire. With overwhelmed joy, hope and enthusiasm, members of IYCW who are also victims of the fire disaster

Addressing the victims at the Market including members of the group in the market, Nwaudunna presented the relief funds and donations to the victims, assuring them of Igbo Youths Assembly’s continuous support and help until they are revived and reestablished.

He advised the victims and the entire traders at the market to adhere to safety rules and take precautionary measures in order to avert future occurrences.

Presenting the cash donations, he said “The funds is a consolation/relief to the victims on the loss of their goods and property. We at Igbo Youth Assembly worldwide, we love, care and be our brothers keeper”

He assured of the Assembly’s continous prayers and commitment to support and ensure the re- establishment of the victims.

Mr Chukwumeka Okoye who responded on behalf of the victims and others who benefited from the gesture, expressed their appreciation to the leadership of Igbo Youth Assembly Worldwide for their prompt intervention, support and more importantly for finding time in their busy schedules to sympathize and support them”.

He prayed God to continue to strengthen the Igbo Youth Assembly Worldwide to progress and continue to advocate national unity and peace.

In his remarks, Anambra State Chairman of the Asssembly,, Barr. Ezeife Obiorah expressed gratitude to God for using the group to affect lives positively. He also thanked President Muhammadu Buhari for his urgent intervention through the Minister of Humanitarian Affairs and Disaster Management, Hajiya Sadiya Umar Farouk.

Prayers were offered by the treasurer of the group, Gbuefi Nneka, who called for God’s protection and prosperity for the victims and traders of the market.

Recalling Achike Udenwa’s Evergreen Legacies In Imo And Beyond. By Chijioke...

innonews - July 21, 2021 0
The tales of good governance follow a bespoke pattern; that of laudable achievements, people-focused leadership, and economic development. In...

Coronavirus: Markets To Be Shut In Imo, Screening Of Commuters...

innonews - March 26, 2020 0
A near lockdown is imminent in Imo State despite no reported case of the corona virus pandemic in the State.

Imo Guber Election: What Happened In Tribunal On Monday

innonews - August 20, 2019 0
Legal hostilities continued at the Imo State Election Petition Tribunal, sitting in Owerri on Monday when counsel to the Peoples Democratic...