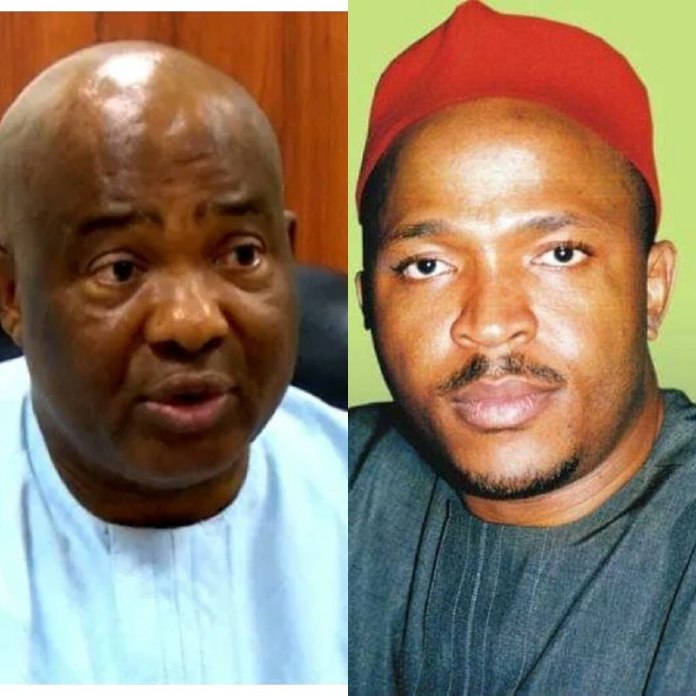 The battle for the soul of the All Progressive Congress, APC in Imo State is already firing up with key stakeholders making deft and strategic steps to pocket the party.

The unseen war is fueled by the 2023 governorship contest in the State.

The political tiki- taka in the party has been between the camps of former Governor Rochas Okorocha, Senator Hope Uzodinma and new entrant in the fray, Minister of State for Education, Hon.Emeka Nwajiuba.

INNONEWS observed that the unfolding political dynamics is tilting towards the Junior Minister for Education whom credible sources said “may consider to run the 2023 guber in the State”.

Further findings indicate that the Minister has a structure well oiled, neatly tailored and ready for the big battle ahead. Another source also claimed that the G-42 which Nwajiuba is behind its formation have been in existence for a long time.

An ally of the Minister and Director General of G42, Sir.Chinedu Ogubuike, KSM said “It is too early to speak on 2023 when he (Nwajiuba) is fully engaged in the task of helping Mr. President to actualize the Next level Agenda

“But naturally, he is the leader of the party in the State based on his position. There will be no tussle on who should lead the party and there is no need for that because soon, it will play out. He is the only one from the State and from the party in Imo State that sees the President on a weekly basis.

“He is not contesting with anyone for the leadership of the party because he is busy at the moment facing his job as a Minister of the Federal Republic of Nigeria.

The camp of Senator Hope Uzodinma seem to have foreseen the impending leadership tussle that may play out in the party, which prompted the State Chairman, Marcellinus Nlemigbo, to reaffirm Senator Uzodinma as leader of the APC in the State at the weekend.

Nlemigbo at a news conference in Owerri, Saturday, after a stakeholders meeting, reiterated the suspension of former Governor Rochas Okorocha, whom he accused of contributing to the failure of the party in the State as a result of his wishy- washy ideologies.

Senator Uzodinma was behind the installation of the Nlemigbo led State exco after a bitter war before the governorship election.

A source in Camp Hope said the politics of 2023 is not off the radar of the camp of the senator despite being hopeful that the Appeal Court will favour his case challenging the outcome of the 2019 governorship election.

He said “This is why in Camp Hope; the Senator’s political camp remains intact. If the Appeal Court does not favour us on the outcome of the 2019 election, 2023 will be on the radar.

“As you can see, the senator is seriously oiling and maintaining his political structure. Some of his aides were given juicy positions in the National Assembly. And this underscores the fact he is not giving up on his guber ambition. We will plan ahead.

Another core loyalist of the Senator however said “the future is bright and it is premature to jump the gun. You better wait after the Appeal Court. Do not be faster than your shadow”  he told INNONEWS

It was unclear what the political fate of the Rochas Okorocha camp will be after the Appeal Court rule on the matter instituted by Okorocha’s son in law, Uche Nwosu challenging the outcome of the governorship election.

Nwosu had lost at the Election Petition Tribunal.

Okorocha had last month initiated a Coalition of political forces by convening a meeting which had in attendance the governorship candidate of the All Progressive Grand Alliance, APGA, Senator Ifeanyi Araraume, and former governorship aspirant in the PDP, Senator Sam Anyanwu.

While some say Okorocha may join the presidential race in 2023, that is if his suspension from the party is lifted, his political foot soldiers may want to try their luck again in the State in 2023

innonews - May 22, 2017 0
Hundreds of personalities at the weekend converged again in Owerri, Imo State capital to witness the award of honour conferred on the Special Assistant...

innonews - July 10, 2019 0
The Debt Management Office, DMO, has released 25 Trillion naira debt profile of the Federal Government and that of 36 States of...

innonews - August 18, 2018 0
To demonstrate his resolve to vie for a second term for Owerri municipal seat in the Imo State House of Assembly, Hon Lugard Osuji...

innonews - May 15, 2018 0
*BY COLLINS OPURUOZOR* A wonderful day as the consultation train of the Imo Rebirth Movement led by Mr. Okey Ezeh hit Isu and Njaba LGAs....