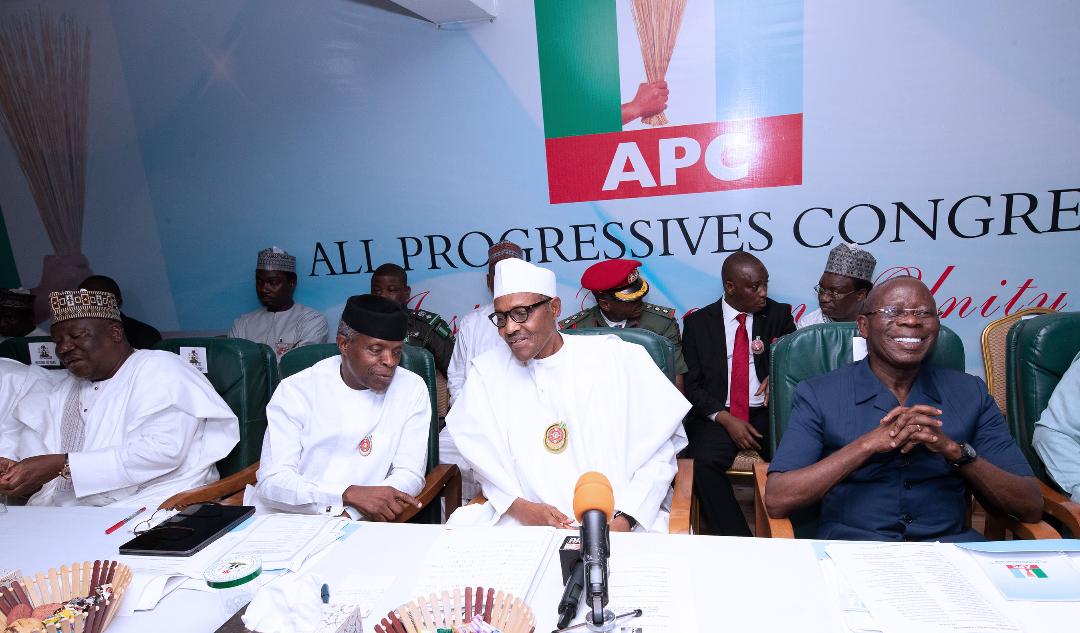 The National Executive Committee of the All Progressive Congress, APC, has issued fresh directives to its members as part of measures towards re- positioning the party across the country.

This was part of the resolutions of NEC at its meeting held in Abuja.

NEC of the ruling party also adopted the recommendation of the National Caucus that President Muhammadu Buhari should constitute a National Reconciliation Committee.

All APC members were also admonished to read the party’s constitution and abide by the provisions in it and ensure that they do not take the trust of their constituents for granted.

According to a statement by Lanre Issa- Onilu, APC National Publicity Secretary, the Standing Committee will be empowered to address grievances of party members and resolve existing conflicts, all with a view to fostering unity and oneness within the party.

President Buhari will not seek a third term in office, the statement also stated.

The party charged all APC members, leaders and elected officials to reposition themselves in their respective constituencies so as to sustain the administration’s landmark legacies beyond 2023.

The statement further reads “The president said history would not be fair to members if the APC collapses after his second term.

He said history will be fair to the APC if the Party remains strong and not only hold the centre but make gains”, the statement noted.

“President Buhari further tasked the nation’s elite to search their conscience whether they have been fair to the people, having watched in silence the frittering of the country’s resources during the 16-years inglorious reign of the Peoples Democratic Party (PDP),” he said.

Buhari assured that the APC-led Federal Government would not relent in providing the enabling environment for Nigerians to thrive by continuously investing massively in the country’s infrastructure renewal in the road, rail and power sectors.

Atiku: Despite Okorocha’s Anger, He Will Not Leave APC

innonews - May 10, 2019 0
BY RALPH EJIMKONYE Governor Rochas Okorocha does not intend to leave the All Progressive Congress, APC