Governor David Umahi of Ebonyi State has commiserated with the family of the three siblings who died in a recent building collapse in the state, just as he ordered full investigation into the matter.

The Governor who visited the tragic scene of the building collapse  in Akaeze, Ivo LGA  said  that it is difficult to bear huge loss of three children without any form of sickness but through such tragic incident.

INNONEWS had reported how three children of one Sunday Okereke from Akaeze Community in Ivo Local Government Area of Ebonyi State lost their lives, when a dilapidated building in the community caved in and fell on them.

The victims include 11-year-old Mmesoma; Onyinyechi, 5 and 3-year-old John.

The victims’ mother, Elizabeth and another sibling survived the incident and are now receiving treatment in hospital for injuries they sustained.

Governor Umahi  who was represented at the visit by the Secretary to the State Government, Dr. Kenneth Ugbala with some top government officials described the incident as a sad one,
noting that such occurrence is first of its kind in the State and ordered for investigation into the root cause of the incident.

He urged the family to take heart, praying God to divinely bless the living in such a way that those alive will replace the vacuum that may be created by the incident.

He also made donation of an undisclosed amount of money to the family and assured them of more assistance. 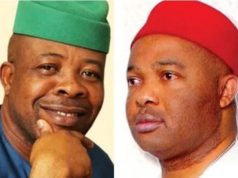 Is Imo State On Pause?

Cracks On The Wall:Uzodinma Shuts Out Okorocha’s Men From Appointments