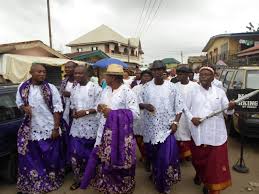 The ceremony took place at the Nkwo Emeke Market square and was witnessed by a notable community leader and illustrious son of the area, Nze Herbert Chikwe, and wife, a former Minister and one time Ambassador, Dr(Mrs) Kema Chikwe.

Nze Chikwe, who stood in for His Royal Highness Eze C.C Njoku, traditional ruler of Umuakali Ukwu autonomous community, who was unavoidably absent, described the people of Emekuku as peace loving, hospitable and lovers of their cultural heritage and tradition.

He advised them to not to relent in preserving their rich cultural heritage and always show respect and loyalty to constituted authorities.

Nze Chikwe also commended the Imo State Governor, Hon.Emeka Ihedioha, CON, for bringing Imo back on track, urging him not to be distracted but rather remain focused on his vision to rebuild Imo State.

Uguzo Emekuku is an annual cultural festival of Emekuku Viz Umuakaliukwu, Azaraubo, and Ezemba (the tripod) held every 8th month of the local calendar year and which falls in November.

The festival begins on Nkwo Emeke Market day and last for three weeks during the festive period.

The community forbids and prohibits all forms of fights, quarrels, including court cases, elaborate burials, gunshots.

It is also a period of solemn peace and commemoration of the liberation of their various communities from brigands who had invaded the community and engaged in various forms of activities such as armed robbery, killings, intimidation and harassment, including rape.

The people had to consult an oracle which asked them to offer their sacrifices to certain Osukwu palm tree. The sacrifice led to confusion and a free for all fight among the invaders and subsequent fleeing of the area.

During the festival, the Chief Priest and Nde Oha Emekuku do perform cultural rites and render solemn prayers and invocations for the peace and well being of the people.

innonews - June 20, 2018 0
Iceland Coach, Heimir Hallgrismsson has said his team will want to win Nigeria to consolidate its fine start in Group D of the ongoing...