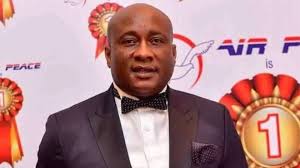 Allen Onyema, chief executive officer of Air Peace, has described as strange, the allegation of $20 million fraud and money laundering levelled against him by the US department of justice, The Cable reports

In a statement, the US authorities said Onyema moved more than $20 million from Nigeria through US bank accounts in a scheme involving “false documents” based on the purchase of airplanes.

But responding in a statement his lawyers issued on his behalf on Saturday morning, the Nigerian businessman said he is ready to clear his name.

“On behalf of Allen Onyema, we hereby state that he strongly denies and will vigorously defend himself against the allegations made against him by the US Attorney in Atlanta, Georgia in relation to purchase of Aircraft, Aircraft spares and Aircraft maintenance,” the statement read.

“None of the allegations involve any third party funds but relate to his funds utilized in the Airline business. There is no allegation that any Bank [in the United States, Nigeria or elsewhere], Company or individual suffered any financial or any loss whatsoever.

“The allegations are unfounded and strange to him. Allen Onyema has a track record built on honesty and integrity and will take all necessary steps to clear his good name and hard earned reputation. He looks forward to an opportunity to rebut these allegations in Court.”

Onyema was indicted alongside Ejiroghene Eghagha, the airline’s chief of administration and finance, who is said to have also committed “aggravated identity theft” in connection with the scheme.

The US authorities, however, said both Onyema and Eghagha are presumed innocent of the charges and it will be the government’s burden to prove the guilt beyond a reasonable doubt at trial.

In September, Onyema was hailed by many for evacuating Nigerians stranded in South Africa at no cost.

The house of representatives had subsequently recommended him for national award.

innonews - November 14, 2018 0
National Chairman of the All Progressive Congress, APC, Comrade Adams Oshiomole, has said despite the misunderstanding with Governor Rochas Okorocha and other State Govenors,...

innonews - March 26, 2022 0
With Senatorial Primaries in the Peoples Democratic Party, PDP drawing close, the big battle for Orlu Senatorial seat is already raging in the...

innonews - December 22, 2020 0
The remains of late High Chief Igbokwuagharia Eugene Chilaka, son of the Paramount Ruler of Mbaise, Chilaka Ukpo will be laid to...