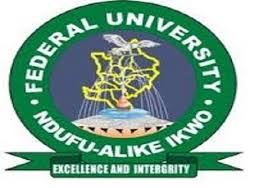 The Vice-chancellor of the university, Professor Chinedum  who disclosed this during the pre-convocation press briefing with newsme held at the University Senate chamber said  “Effiong as we know has a very prominent place in Nigerian history.

He  said  512 graduates would be awarded with degrees during the convocation and  20 out of the 512 graduating students bagged First Class in their various programmes in the university.

“The current thing happening is that for the first time in the history of our University, we have people who would be awarded post graduate degrees. We have two persons to be awarded honorary degrees. One is the posthumous honorary degree to the late Philip Effiong. Philip Effiong as you know has a very prominent place in Nigerian history. The second person will be the former Speaker of Delta State House of Assembly, Hon. Victor Oche”.

He explained that the modest development recorded by the school was due to commitment of the various stakeholders, including the school management and the host community, Ikwo and by extension, the state government.

According to the Vice-Chancellor, 28 courses  were being offered in the institution which had been accredited  as they were working on getting the Department of Architecture in place, noting that the late Dr. Alex Ekwueme who was named after the school was famous for being an architect.

innonews - July 9, 2018 0
The battle for the heartbeat of the All Progressive Congress, APC in Imo State may not be over as the Imo Restoration Coalition have...