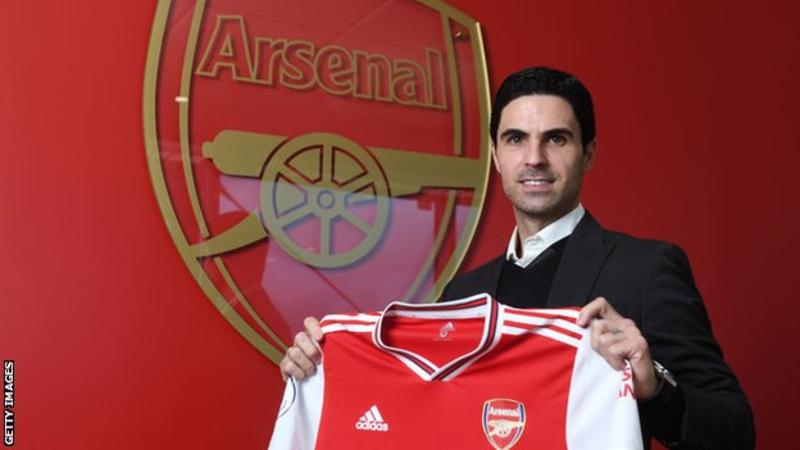 Arsenal have appointed their former captain Mikel Arteta as head coach on a three-and-a-half-year deal.

The 37-year-old won the FA Cup twice in a five-year career with the Gunners and succeeds fellow Spaniard Unai Emery, who was sacked in November.

Arteta had been working as a coach under Pep Guardiola at Manchester City, joining the club in 2016 after retiring as a player.

“We need to be competing for the top trophies in the game,” Arteta said.

“That’s been made very clear to me in my discussions with [owners] Stan and Josh Kroenke and the senior people from the club.”

He will take over as Gunners boss on Sunday, leaving Freddie Ljungberg in interim charge for the trip to Everton – another of Arteta’s former clubs – on Saturday (12:30 GMT kick-off).

Arsenal are 10th in the Premier League with 22 points.

“We all know there is a lot of work to be done to achieve that but I am confident we’ll do it,” added Arteta.

“I’m realistic enough to know it won’t happen overnight, but the current squad has plenty of talent and there is a great pipeline of young players coming through from the academy.”

“Mikel stood out to every single one of us as the perfect person for us,” he said.

Arteta’s coaching team has not yet been announced.

Ljungberg has won once in five matches since being appointed on a caretaker basis on 29 November, and the Swede called for some clarity on the situation after Sunday’s 3-0 home defeat by champions Manchester City.

The Gunners have now gone six games without a win at Emirates Stadium, their longest run without a home victory since 1995. Arsenal are seven points behind fourth-placed Chelsea, after five victories in 17 matches this season.

innonews - December 15, 2020 0
The Nigerian Communications Commission (NCC) has given telecommunications operators in the country two weeks to block all SIM cards that are not...

innonews - April 18, 2018 0
Political stakeholders and key players in Imo State chapter of the All Progressive Congress, APC are now gearing up for the party’s congresses and...

innonews - June 21, 2021 0
The Peoples Democratic Party, PDP, and the All Progressive Grand Alliance, APGA in Imo State, Monday, reacted to reports that most of...

innonews - February 13, 2020 0
Ajax have confirmed that their winger, Hakim Ziyech, will join Chelsea this summer transfer window for €40 million. The...