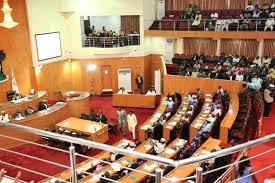 The resolution of the House followed a motion of urgent public importance moved by the leader of House, Hon. Victor Chukwu, representing Ezza North East State Constituency and was unanimously supported.

The lawmakers who convened an emergency plenary at the Assembly complex following the incident resolved that Hon. Clement Odah be arrested and prosecuted.

The House also directed its ad-hoc committee on Local Governments to immediately commence the investigation of the Council Chairman.

The emergency plenary was presided over by the Deputy Speaker,Hon. Obasi Odefa.

The Member representing Ebonyi North East State Constituency and Deputy Chief Whip, Hon. Benjamin Ezeoma, who was at the budget room when the incident took place, in an interview, confirmed that the lawmaker was actually slapped by the Council Chairman and described it as an embarrassment to the House.

He further explained that the action of the Council Chairman infuriated them, which led to the emergency plenary.

In an interview, Hon. Chinedu Onah who is the Chairman, House Committee on Information, confirmed he was assualted by the Chairman, for doing nothing.

Onah said the Council Chairman confronted him when he was performing his legislative duties with other lawmakers and accused him of stepping down his nominees for management committee members who came for screening in the House.

“He came to our committee room this morning where we were taking on some MDAs on budget defence and started shouting that the small boy, which is me, stepped down his nominees as members of Management Committee.

“That he has come to tell me that I must clear them. But unfortunately, I didn’t step down his nominees. That’s not my Constituency. I am not representing Clement Odah. I am representing Ohaukwu South State Constituency.

“Besides, I have not stepped anybody down in the course of the screening. I owe him no appologies to have done that, because that’s my job to represent my people. But unfortunately, I didn’t do that.

But in a swift reaction, the council Chairman, Hon Clement Odah denied slapping the lawmaker.

Odah said he only came to the House to make inquiries why four appointees of the Governor from his Council were not screened and thereafter exchanged pleasantries with some of his friends who are lawmakers and left.

“I was at the Assembly complex to see some of my friends.

“I saw Hon. Chinedu Onah and l approached him to know the reason for the non -screening of four of our nominees for appointments as management committee members.

“I reminded him that his role as lawmaker from the Local Government was to ensure the protection of our people and not to play up their deficiencies.

innonews - October 20, 2021 0
As the November 6 governorship election draws close in Anambra State, the governorship candidate of the All Progressive Grand Alliance, APGA, Prof...

innonews - April 6, 2018 0
The funeral of the mother of a top All Progressive Congress, APC chieftain, Chief Charles Amadi in Ikeduru Local Government Area of Imo State...