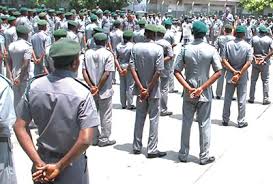 The Federal Operations Unit (FOU), Zone ‘C’ of the Nigeria Customs Service (NCS), Owerri says it has intercepted and seized 333 bags of foreign rice and 4,958 pieces of used tyres concealed with crates of bear and malt.

The Area Controller of the zone, Comptroller Kayode Olusemire, who made this known while showcasing the seized items to journalists in its Owerri and Benin offices respectively said the rice was concealed with crates of bear and malt drinks.

He said the seized items with a Duty Paid Value (DPV) of N182 million was seized along Benin axis and Owerri -Port Harcourt Road.

Olusemire said investigation was ongoing to ascertain those behind the nefarious act.

He said that the driver of the truck abandoned the vehicle and took to his heels upon interception by his men.

He said the zone made a lot of seizures during the Yuletide, such as rice, suitcases, vegetable oil, cartons of toilet soaps and used tyres saying that customs are not relenting on their efforts to curb the country of smugglers.

“Anyone that sees the truck will think it is carrying just empty crates. But the crates are concealed with 230 bags of foreign rice.

“We will continue to intercept and seize smuggled goods as the smugglers would never escape our radar.

“We’re mopping up rice in this zone and anywhere we find a bag of foreign rice, we will pick it up,” he said.

Olusemire advised management of companies operating in the country to be careful the kind of persons they employ as drivers, saying that NCS would prosecute the company if it failed to produce the fleeing driver.

The customs boss expressed shock that in spite of the dangerous effects of used tyres in the country, some people were still in the business of smuggling them into the country.

“As you can see almost, all the tyres expired since 2011. But our people don’t see any danger in bringing them into the country.

“The statistics we have is that 259 people died of accidents this past Yuletide and used tyres contributed to 90 per cent of the cause of the accidents and deaths.

“Because we have made the importation of rice difficult, they have resorted to bringing used tyres,” he said.

Olusemire advised Nigerians, especially businessmen, to desist from acts that are inimical to the nation’s economy.

According to him, the Nigeria Customs Service is now better equipped, trained, motivated and mobilized to checkmate smugglers, their agents and collaborators in their “nefarious and unpatriotic act.”

He warned smugglers to have a rethink as the Nigeria Customs service was determined to rid the nation of prohibited goods.

He also advised Nigerians to use the window period given by the Federal Government to verify with the service if duties were paid on their vehicles and where need be, pay the accurate amount to avoid the wrath of the law.

innonews - December 12, 2017 0
By Dan Opara# A youth group under the aegis of "All Nigeria United Nations Students and Youths Association, ANUSA, gathered in Owerri for their Zone...

innonews - June 24, 2021 0
(NAN) A Bill for the establishment of the Corporate Social Responsibility (CSR) Commission in Imo was read for the second time at...

innonews - May 15, 2022 0
Anambra State Governor, Chukwuma Soludo, has released details of his meeting with leader of the Indigenous People of Biafra, IPOB, Mazi Nnamdi...