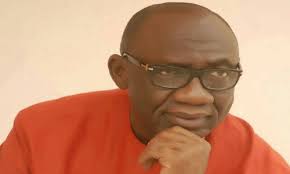 Former Secretary to Government of Imo State, Sir Jude Ejiogu, has absolved himself from newspaper advertorial titled ” Imo Governorship Case: The Task Before The Supreme Court” by a group, “Concerned Imo Leaders”

In a statement signed by his Media Adviser, Ikenna Onuoha, he said his name ” was criminally roped in as one of those Imo leaders that endorsed and sponsored the publication

Re: Imo Governorship Case: The Task Before The Supreme Court

Our attention has been drawn to an advertorial on page forty one (41) of ThisDay Newspapers of Friday, January 10th, 2020 by a so-called Concerned Imo Leaders.

In the said advertorial, the name of the former Secretary to the Government of Imo State (SGI), Sir Jude Ejiogu was criminally roped in as one of those Imo Leaders that endorsed and sponsored the publication.

The truth of the matter is that, Sir Jude Ejiogu has never been invited to any meeting of such nature where issue of sponsorship of the said publication was discussed.

In as much as these mischief makers have the right to deliberate any issue of their concern, the name of the former SGI should not have been included or mentioned in the story since he is totally naive of the whole thing.

Consequence upon this, we affirm and inform the public that at no point did Sir Jude Ejiogu authorized any person or group of persons to include his name in the said publication on ThisDay Newspapers, and as such, should disregard it.

We regret any inconveniences the dubious inclusion of the former SGI’s name in the advertorial would have caused the public.