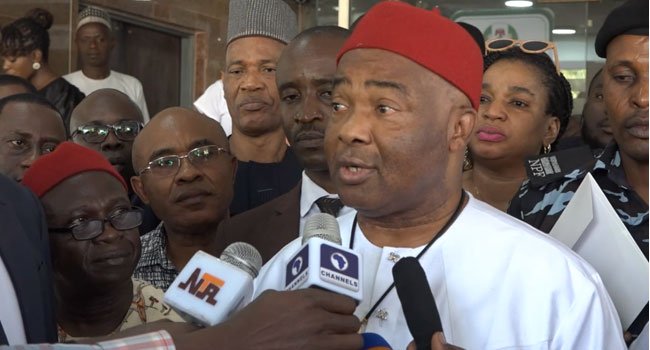 Governor Hope Uzodinma of Imo state has made a huge sacrifice in order for his administration to be able to pay salaries and pensions as and when due.

The governor, through his spokesman, announced on Tuesday, January 28, that he forfeit his security votes to ensure workers in the state are adequately taken care of.

Uzodinma’s decision was reportedly necessitated by the financial limitations of the state.

The Imo state governor also revealed his plans to address the electricity problem in the state by building power and petrochemical plants.

For more reality-based decisions, Uzodinma said he would review the 2020 budget passed by his predecessor.

He particularly hinted at reversing the plan of his predecessor to build stadiums in all the local government areas in the state. He said the funds for the project can be used for other better people-oriented projects.

To address the issue of insecurity, Governor Uzodinma said plans are already ongoing to create a state security outfit.

The security votes are paid on a monthly basis by the federal government to the state governors.

Critics have described the payment as unconstitutional, alleging that the funds are usually diverted for personal use by the governors as they are not subjected to auditing and legislative oversight.

It reported that Governor Uzodinma had attended his first National Economic Council (NEC) meeting at the presidential villa, Abuja.

The Imo governor after the meeting told newsmen he will continue ruling the state from where his predecessor stopped.NLC reacts as Borno governor commences paying N30,000 minimum wage

He promised to give his best just as he made reference to his manifesto which he said contains his plans for the state.

innonews - December 7, 2017 0
As the life of this administration winds down, there has been raging issue of ceding the 2019 governorship to Owerri zone. This issue became...

innonews - October 13, 2018 0
Forbes Africa, a major global research firm, has rated Nigeria as the 2018 best economy in Africa, beating South Africa, Egypt and others. According to...