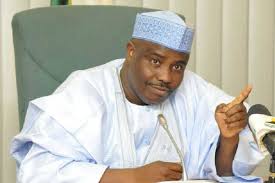 Sokoto State Governor, Aminu Waziri Tambuwal, has described the move by ousted Governor of Imo State, Rt Hon Emeka Ihedioha, to seek a review of Supreme Court judgment which removed him from office, as a right step in the right direction.

Speaking to journalists in Abuja, Tambuwal, who was recently elected Chairman, PDP Governors Forum, said he is optimistic that the Supreme Court will take another look at the verdict.

The duo were one time Speaker and Deputy Speaker of the House of Representatives.

The Supreme Court judgment had attracted disapproval from the PDP whose members went on protest in some parts of the country citing flaws in the verdict.

Tambuwal said “Of course I can confirm to you that Rt. Hon Emeka Ihedioha is re-approaching the Supreme Court for a review of the last judgement on the Imo election.

“We are all ready to support him and back him as a party and as a Forum. We are very sure that by the time the Supreme Court really takes a second look at the matter, there may be some change in its position.

“So we are praying hard and we are working hard to get what has not been properly delivered in terms of justice in that matter and that it is addressed.

“We will work with the National Working Committee and other organs of the party, for us to strengthen the party and to continue to build our democratic culture, the rule of law and constitutionalism in our country.

“And of course we will work towards fostering peace among governors and indeed the entire party.

“I assure you that we are going to use this platform to bring everybody on board. There are issues here and there but they are not beyond us and we shall reconcile those who are having some issues with one another and also ensure that our party is firmly positioned for the challenges ahead”.

Ex Imo NUJ Chairman, Onyeneke Reveals What Journalists Should Do During...

Eze Madumere Cries Out: My Life In Danger

innonews - August 3, 2018 1
Embatted Deputy Governor of Imo State, Prince Eze Madumere has raised an alarm alleging that his life is in danger after the Police reportedly...

innonews - June 21, 2017 0
Following an open letter by social crusader and activist, Ikenna Samuelson Iwuoha, to the Imo State Commissioner of Police, Chris Ezike over the illegal...

Kim Rocks Outfit That Has So Many Pockets In Paris

innonews - June 21, 2018 0
Kim Kardashian returned on Thursday to Paris after her robbery incident that occurred in October 2016. She was seen arriving at Loius Vuitton Menswear Spring/Summer...