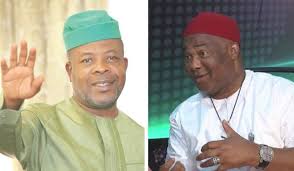 Speaking to INNONEWS in an interview, the President, Imo Democratic Alliance, IDA, Mr Collins Onwudiwe, called on the Justices of the Supreme Court to make a final pronouncement, on who is the authentic Governor of the State come March 2nd.

The Supreme Court had on February 18, adjourned hearing on the review application filed by Emeka Ihedioha of the Peoples Democratic party, PDP.

He prayed the court to set aside it’s January 14 verdict which sacked him as Governor of Imo State and declared Senator Hope Uzodinma of the All Progressive Congress,APC as duly elected Governor.

The IDA President said it is worrisome that Imo State is the only State in the Federation, still grappling with election matters one year after governorship elections were held in some states across the country.

“In other States, governorship elections were held with that of Imo State have concluded the attendant legal fireworks that trailed such elections

“It is unfortunate in Imo State, we are talking about the governorship election and other related matters one year after. This is not good for the development of the State.

“We call on the learned Justices of the Supreme Court to make a final pronouncement on who is the rightful Governor of Imo State on March 2nd when the review application comes up before it.

“And we appeal to the contending parties involved, to please accept the decision of the Supreme Court on the review application

“We will not accept further political fireworks or disturbances in the Stste after the apex court rule on the application.

“There is stagnacy in Imo State. In the past one month, Imo is at standstill. People are confused.

“They are wondering how and why the issue of who is the rightful Governor of the State is still raging.

“We had Emeka Ihedioha as Governor for seven months, Hope Uzodinma now came in via the Supreme Court Judgement of January 14. He is barely a month in office.

“Now the Supreme Court will decide who is the rightful Governor on March 2 during the review application. We pray for no further adjournments. Let this matter came to an end.The masses are suffering from this impasse.

The IDA President noted that such uncertainty in the leadership in the State is affecting it’s economy.

” We appeal to the Justices of the Supreme Court to do Justice on this matter in order to put the State back on the right track.

“As it is now, this uncertainty can scare away investors from the State. Businesses are on the low ebb because nobody knows what will be the verdict of the Supreme Court after the review application.

“Even the Governor is not settled because he has been away from the State for more than two weeks now.

” No State Governor can concentrate to do his job under the present circumstance.

” Imo State is pregnant and we call on the Supreme Court Justices to please save our State from it’s present stagnant condition and uncertainty” he concluded.

“When We Gather For Next Sitting, APC Will Have 26 Lawmakers”...

innonews - February 2, 2020 0
BY: UJU ONWUDIWE Speaker, Imo State House of Assembly, Hon.Chiji Collins, has revealed that by the time the House...

‘Nigeria May Recover From Covid 19 Next Year’ NCDC DG, Ihekweazu

innonews - May 3, 2020 0
Nigeria may return to normalcy from the coronavirus pandemic next year, ruling out the end of the virus in 2020.

innonews - April 3, 2018 0
It goes without saying that every woman in the world wants to the prettiest.   But the important point is that not everyone can afford...