Supporters of the Peoples Democratic Party, PDP, and former Governor Emeka Ihedioha held a prayer protest at the Kanu Nwankwo stadium, Owerri, where they called for God’s intervention as the Supreme Court hears a review application filed by Ihedioha at the apex court to set aside it’s judgment which removed Ihedioha as Governor and installed Hope Uzodinma as duly elected Governor of the State.

The Supreme Court had yesterday reaffirmed the sack of Bayelsa State Governor elect, David Lyon of the All Progressive Congress, APC insisting on its February 18 judgement, which declared Douye Diri of the PDP as Governor of the State.

The prayer protest was attended by PDP faithful across the State including officials of the past administration.

Ihedioha Has No Plans To Withdraw Matter- Ex Commissioner*

Meanwhile a former Commissioner in the State, Vin Udokwu, has debunked online news that he told Ihedioha’s supporters at the prayer session that the ousted Governor has withdrawn his review application at the Supreme Court.

“My attention has been drawn to the online news making the round that I addressed the teaming supporters of H.E. Rt. Hon. Emeka Ihedioha, who gathered at the Kalu Nwankwo Sports Centre today for a prayer session, informing them of the intention and indeed the decision of H.E Ihedioha to withdraw the matter at the Supreme court coming up on Monday 2nd of March 2020.

I hereby state once again that this is cheap propaganda and the mother of all lies. The gathering was purely for prayers and I did not address the people let alone telling them that H.E. Rt Hon Ihedioha is planning to withdraw the matter in court. I hereby advise the writer to desist from this type of mischief which is capable of putting him into trouble.

This fabrication and falsehood goes to confirm my earlier statement that the APC are already jittery expressing apprehension and fear of losing at the supreme court on 2nd of March 2020, otherwise why all these pressures on Ihedioha to withdraw the case.

“All our supporters should continue on our already scheduled prayers and fasting sessions . God will definitely give us justice. 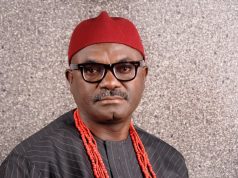