Home Politics “When We Gather For Next Sitting, APC Will Have 26 Lawmakers” Imo... 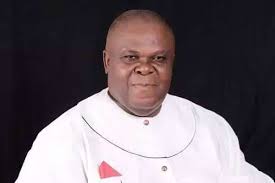 Speaker, Imo State House of Assembly, Hon.Chiji Collins, has revealed that by the time the House gathers for next sitting, the All Progressive Congress APC will have 26 lawmakers.

Addressing APC members in Owerri, Collins said the PDP which were in the majority before the Supreme Court ousted Emeka Ihedioha as Governor and declared Hope Uzodinma as duly elected,said the PDP would have only one Lawmaker by the time the Assembly resumes February 13.

The APC is in the majority in the House, with 18 lawmakers, PDP has eight members while Action Alliance do have a member.

The Speaker was among PDP lawmakers who dumped the party for the APC last week.

According to him, he said every lawmaker at the State House of Assembly wants to join the APC because of the personality of the Governor.

The Speaker and others had come under criticisms for dumping their original political parties which conveyed them to the State legislature.

Before the Speaker and others defected from the PDP to APC, seven members of the House from the All Progressive Grand Alliance, APGA and the PDP had also jumped over to the APC

The national leadership lampooned the lawmakers for the defection and declared their seats vacant while the State leadership alleged that lawmakers who decamped were induced with monetary gains.

innonews - April 25, 2018 0
*BY CHIDI ABBAH* *I Have No Hand In It- Nwosu The taxi cab painting policy of the Imo State Government took a new turn yesterday when...

ABM:The Reward For The Dignity Of Labour. BY NZE JAMES CHINOYEREM,KSM

innonews - September 18, 2019 0
Local Government supervisory councillors in Imo State who went to Court to demand payment of their benefits and entitlements have suspended further...