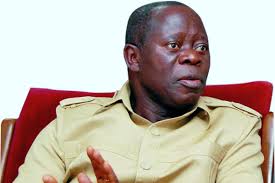 Embattled National Chairman of the All Progressive Congress, Adams Oshimole has received the backing of Imo State Governor, Hope Uzodinma

Since, Oshimole has been entangled in a fierce battle to save his seat as powerful forces within the party have renewed their onslaught to ensure he leaves the party as Chairman.

According to Uzodinma, he said those pushing for the ouster of the embattled APC national chairman, Adams Oshiomhole, are working for the main opposition and “some leaders of the ruling party”.

He also pledged support for the national chairman and vowed to work against any plot to humiliate him out of office.

“Many of us, leaders of the party, are aware that those clamouring for the chairman’s removal are working with the PDP to destabilise the party. But they will fail because we will not allow them to humiliate our national chairman out of the party through illegal means or by dropping the name of Mr. President,” the governor told journalists in Imo State on Friday.

This is the first time Mr Uzodinma, who recently won a legal tussle to lead the state, would be addressing reporters since the suspension of Mr Oshiomhole.

“Let me make this clear: we will not allow Oshiomhole to be humiliated out of office,” he said. “He has done nothing wrong and no amount of propaganda and illegal plots can succeed in removing him from office.