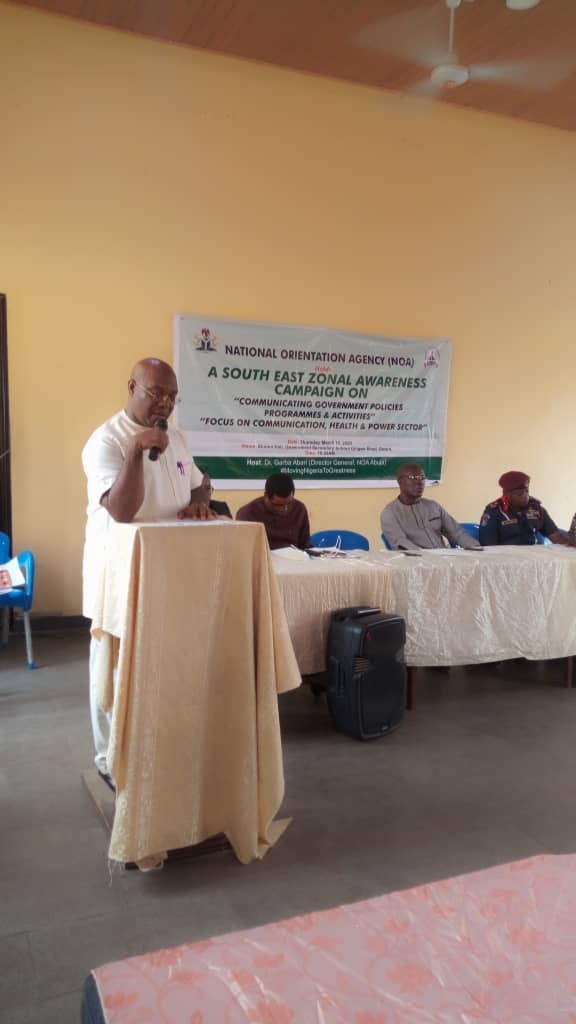 The Imo State NOA Director, Mr Vitus Ekeocha, said this at the South East Zonal Awareness Campaign on “Communicating Government Policies, Programmes and Activities” organised by the agency in Owerri.

The News Agency of Nigeria (NAN) reports that the programme had its focus on “the Communication, Health and Power Sectors.”

Ekeocha said the programe was in line with NOA’s mandate of ensuring that activities, policies and programmes of the government were well understood by the citizenry.

He said that the programmer was equally aimed at feeling the pulse of the people on these policies, programmes and activities.

“Today, the revolution in the communication sector has been of immense benenit to both the citizenry and government in communicating and understanding government programmes and policies.

“The health environment has been awash with outbreaks of diseases in various parts of the country; how ready are the government and the people in taking measures to combat and contend with these outbreaks, especially the Lasser fever and COVID-19 outbreak which have been declared pandemic by the WHO,” he said.

Ekeocha said that the power sector was a critical area of the economy as such that the Nigeria Electricity Regulatory Commission was invited to enlighten the citizens of the south east on the various measures and policies undertaken by government in the power sector.

In a keynote address, Dr Garba Abari, the Director General of NOA, represented by the Ebonyi State Director, Dr Emmanuel Abah, said the major objective of the programme was to bring to the people at the grassroots, certain policies of government, so they would not be left in dark.

“The major objective of this programme is to bring to the consciousness of the people at the grassroots who either are aware or do not know the procedure(s) to access benefits of several policies and programmes of government.

“The good people of Nigeria should be informed and made to understand what the government is doing, how, where, when and how to benefit from it as citizens.

“Most of the activities of government are communicated through electronic and print media which many rural dwellers cannot afford.

“As a result, many Nigerians are left in the dark about government policies and programmes, thereby hindering feedback.

“It is, therefore, with the consciousness of these realities that NOA, in view of its mandate of sensitisation, orientation, awareness creation and harnessing feedback from citizens has deployed several platforms to reach out to the people,” he said.

Abari said that enhanced citizens’ participation was a key indicator of effective government communication, adding that it was the role of government to build the capacity of citizens to provide government with feedbacks regarding its policies.

He listed some of the government’s policies to include, border closure, patronising Made-in-Nigeria goods, the Finance Act, Tax Payment, Social Safety Net Programme, Online banking and the social media.

The director general said that the campaign was expected to elicit feedback that would be replicated in all states and 774 local government areas of the country.

Dr Austin Okeji, the Director, Public Health, Ministry of Health, Imo State, highlighted some government’s efforts at the containment of the recent Coronavírus and Lassa Fever outbreak in all health institutions in the state.

He addressed all fallacious statements made in respect to COVID -19, saying “they are all baseless and without any scientific proof.”

He said that isolation centres had been provided in all state hospitals across Imo in event of any reported case.

Okeji said there was also existing collaborations with the media, education/business sectors, National Center for Disease Control as well as an Incident Command Structure with transport officers set up and mounted at various entry points in the state.

He described the social media as a formidable tool of communication with feedback mechanism as its important feature.

Afoaku called participants to take advantage of the digital age so as not to leave communication gap in disseminating government’s policies.

He, however, identified fake news and misrepresentation as some of the challenges of the social media and advised on the need to always verify information from news apps.

NAN reports that the campaign which had different keynote speakers from the health, communication, power, security sectors, had in attendance the media, entrepreneurs, civil society groups, officials from the Human Rights Commission and others drawn from various ministries, departments and agencies.

innonews - April 13, 2018 0
Former Secretary to Imo State Government and Chieftain of the Peoples Democratic Party (PDP) has described reports both in the newspapers and social media,...