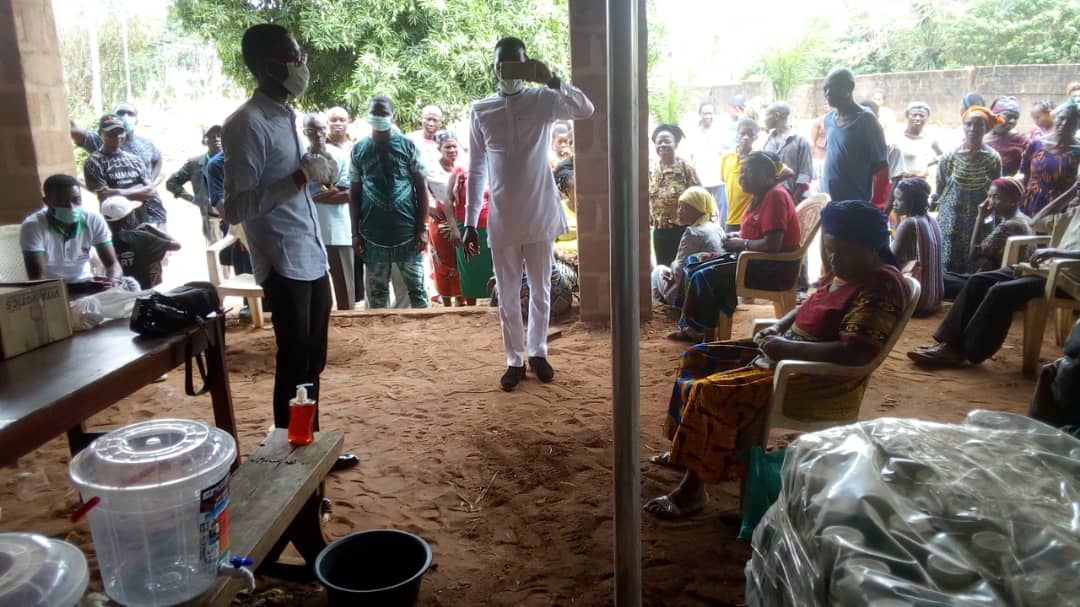 As part of her humanitarian services to alleviate the sufferings of people based on the 14 days lockdown of Imo State by the state government as a result of the Corona Virus global pandemics,a non governmental organization, Malick’s Mercy Foundation, has offered the citizens of Ogwa Anunu Umu Mgbe ancient clan in Mbaitoli Council Area of the state precautionary and preventive lectures, sanitizers, Genus care face and nose masks, sterilized hand gloves and bags of rice.

Chief Malick Metu, the Director of the foundation and Chief Executive Officer of City Cruz Hotels while addressing the people at Oboro Umueze Ogwa Maternity complex with his team of medical personnels said that the foundation is worried over the devastating socio economic effects of the virus and the need to let the rural dwellers know that the coronavirus is real.

Metu popularly known as Kwa Chukwu Kwere Ogwa enjoined the people to be attentive to the free lectures that would help them to prevent contacting the virus and the need to put into action all government precautionary directives towards the virus.

Earlier, Barr. Charles Olumba (Egwurugwu), the President General of Umueze Ogwa community as the host expressed gratitude to the founder and sponsor of the Foundation for his sacrifices and labour of love to his ancestral clan.

The community leader while calling on other illustrious sons and daughters of the ancient clan to emulate the good gestures of Malick’s Mercy Foundation, pointed out that no body influenced the foundation over the philanthropic gestures and prayed for God’s grace and mercy to be upon them.
O itlumba also revealed that based on his recent passionate appeal that some distinguished sons and daughters of Umueze Ogwa have donated some money to ensure that within the period of the lockdown that water will be freely distributed in all the eleven villages that constitute the community as their palliative contributions to the rural dwellers.

Delivery his lecture, Dr. Mike Onyeberechi said that their mission is to reconfirm to the people that Corona Virus is real and sensitized them on the precautionary and preventive measures so as to avert being effected.

Onyeberechi informed that the vaccine for the treatment of Corona Virus is hard to discover and will take a minimum of 8 years for the discovery and certification by World Health Organization (WHO).

According to him ” The people who recovers quickly from the virus attack are mainly people with high body immunity which has to do with age, exercise and food habit.It’s devastating to the aging and people with low immunity and terminal diseases. Thus why it is necessary for self protection and prevention” he stated.

The Medical Expert while further advising the populace on the need to maintain personal hygiene despite their culture and tradition, he informed that COVID – 19 has an incubation period of 14 days and it’s worst than Ebola fever.

He maintained that the best approach to prevent the virus is to maintain a social distance of 3 feet and to avoid touching of your face, this he equally said is the reason people are advised to stop touching their face regularly and to wash their hands every 20 seconds using alcohol based sanitizer.

In her contributions, Lady Ifunanya Nwankwo, a Public Health Officer reiterated the need for people to avoid psychological fears and the need for them to boost their immune system by eating natural foods, vegetables and fruits.

Nwankwo who also took time to teach them how to wash their hands regularly using water and soap and later rob the hands with sanitizer noted fear as the best victory for any disease or sickness. She also canvassed on the need for people to have faith in God even as she advised them on the need to be drinking warm water regularly and hot pepper soup with local delicacies.

The highlight of the occasion was the orderly distribution of customized sanitizers, sterilized hand gloves, face and nose masks to each of the participants while the President General announced that the rice will be shared among the villages