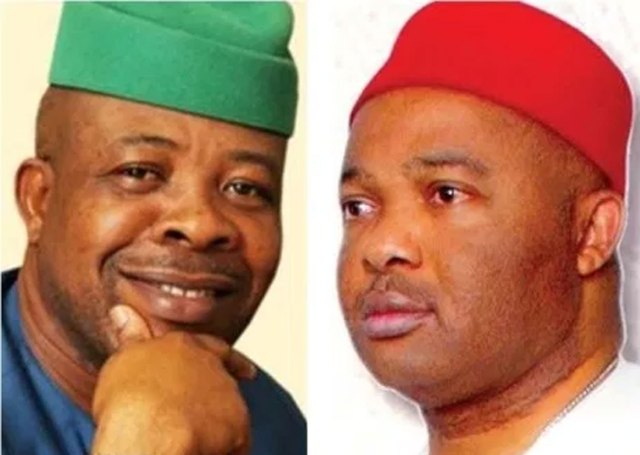 IAC: Allegations Serious, Should Not Be Waved Aside

Fireworks have trailed allegations leveled against the out-gone administration of Hon. Emeka Ihedioha by the present government of Senator Hope Uzodinma .

According to Imo State Commissioner of Information, Hon Declan Emelumba, he said the State government has approved the request of the Auditor General for local Governments and Chieftaincy Affairs, to commence necessary steps to recover N19.63 billion allegedly siphoned from the State-Local Government Joint Accounts Allocation Committee (JAAC), through the Bureau for Local government and Chieftaincy Affairs (BLGCA), by the sacked government of Emeka Ihedioha, in seven months in office.

According to the Commissioner, who spoke to newsmen in Owerri, the monies were allegedly siphoned either for spurious and phony projects, projects/contracts not executed, and or through huge cash withdrawals for undisclosed purposes.

Emelumba, said the misappropriated funds was discovered during a routine audit of the accounts and records of JAAC with the Bureau for Local Government and Chieftaincy Affairs by the Local Government Auditor General for the fiscal year ended 31/12/2019.

The allegations have led to reactions from some of the former Governor’s aides, a watchdog group in the State, Imo Awareness Coalition, IAC, and the company involved, Wallhouse

Hon. Mayor Eze, who was Ihedioha’s Special Adviser on Local Government and Chieftaincy Affairs, described the allegations “a comic relief for this covid 19 at home period”

A watchdog group in the State, Imo Awareness Coalition, IAC, said the allegations are serious and should not be waved away.

Providing an insight how monies were used, Eze said “Wall-house (wa) Ltd won the bid to supply the local governments in Imo state Earth moving Equipment after a competitive bid process and has delivered 17 out of the 27 in the first phase.

“The ones supplied are at the Hero’s square Owerri. The remaining 10 are in Lagos and would be brought to Owerri after the lockdown.

“This information is known to the government. Wall-house has been paid N945m before we left and not N1. 215 billion.

“There was no such thing as unconscionable mandatory withdrawal of N2.405 billion. From who to who, where and when?

“These are outright lies designed to tarnish the Ihedioha Administration” Eze wrote.

A watchdog group, Imo Awareness Coalition, IAC, however differed and expressed concern on the development, wondering why such huge amount of money was expended by the past administration, just to procure caterpillars and pay loaders.

Spokesman of the Coalition, Fidelis Echendu, said the allegations are serious.

He said “There is nothing wrong procuring those earth moving equipment but at the period it was done, it was unnecessary since Imo State, was just recovering from the bruises of bad governance of the administration before that of Ihedioha, and needed funds channeled to human capacity development for a despondent citizenry looking up to that government for a ray of hope.

“These allegations raised by the Uzodinma administration, against Ihedioha are too weighty to be ignored. It is serious and should not be waved away.This should be investigated.

“We had expected prudent management of the finances of the State, and greater attention given to pressing issues at that time by that administation, there was certainly no need to spend close to a billion naria just to buy earth moving equipments, working tools already possessed by reputable construction firms who were to do construction jobs in the State at that time.

The construction firm fingered in the saga, in a statement signed by its Attorney, Barrister Martin Agba said the statements credited to the Imo State Commissioner of Information, were false.

“Our attention has been drawn to a Press Conference held at Owerri by the Imo State commissioner for Information and Strategy, Mr. Declan Emelumba. At the said press conference Mr. Emelumba stated inter ilia:

“That our company, Wallhouse WA Ltd was paid the sum of N1,215,000,000 ( One Billion Two Hundred & Fifteen Million Naira) for the supply of construction equipment.

“That the said contract was undocumented and that Wallhouse WA Ltd has not supplied the equipment.

“We wish to state that these statements are totally false and we therefore deny them in the strongest possible terms.

“Here are the facts:

“In response to the Bid guidelines issued by the Association of Imo State Local Government Transition Chairmen for the procurement and delivery of construction equipment to Owerri, we sent in our priced Bill of Quantities (BOQ) on 10th July, 2019.

“We were subsequently invited to make our presentation and on the 19th of September 2019, we were chosen as the preferred bidder for the supply of 57 (fifty seven) units of Caterpillar earthmoving and construction equipment as specified in the Memorandum of Agreement and Letter of Award.

“Under the first phase of the procurement, we are to deliver a total of 27 units of these equipment.

“On March 23, 2020, our chairman, Chief Chuka Odom met the governor, His Excellency, Senator Hope Uzodinma in his office in Owerri and briefed him personally on the state of the procurement. His Excellency directed his Chief of Staff, Chief Nnamdi Anyaehie to provide the company a location to deliver the equipment.

“On March 24, 2020, a total of 17 units of these equipment, comprising 7 payloaders and 10 graders were delivered on the instruction of the governor to Heroes Square in the presence of Chief Nnamdi Anyaehie and Lady Ruby Emele in charge of Local Government affairs. Our chairman personally oversaw the delivery.

“The remaining 10 units of equipment are currently in Lagos and would have been delivered to Owerri if not for the lockdown and restriction of movement. These will be delivered as soon as movement resumes.

“Contrary to the allegation of Mr. Emelumba, we have received the sum of N945,000,000.00 ( Nine Hundred & Forty Five Million Naira) representing about 50% of the entire contract sum.

“We are therefore at a total loss, against the foregoing, the motive behind the unwarranted, malicious and libelous allegations made against our company by the said commissioner.

“We have absolute faith in the integrity of the high office of the governor of Imo State and its officials to set the records straight.

“We shall deliver the remaining 10(ten) units of equipment as soon as movement resumes.

“It is our belief that government is a continuum and we shall duly execute this contract in terms of the Agreement and expect the Association of Local Government Chairmen, which is a separate arm of government, to fulfill their own obligations under the contract. Dated at Owerri this 15th day of April, 2020

innonews - May 16, 2020 0
The Imo Foundation has unveiled two co joined twins who lost their mother after delivery. The Foundation also appealed...

innonews - July 17, 2018 0
The Imo APC Coalition have risen defence of the State Deputy Governor, Prince Eze Madumere. Madumere has been in the eye of the storm lately...