Home Politics Group Gives Reasons Why The North Should Not Be Afraid Of A... 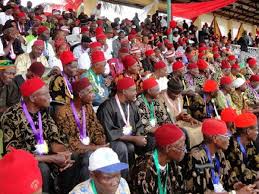 The North and the South West geo political zones, have been advised not to be scared of a Nigerian President of South East extraction, but rather should shelve whatever presidential bid they have and support the South East to produce Nigeria’s next President in 2023.

A group, South East Coalition For Good Governance in a statement in Enugu signed by it’s President, Collins Emedu and Secretary, Odinaka Ahumareze, stated that within the ambit of fair-play and justice, the South East is the next geo political zone, in line to produce a President for the country, after President Muhammadu Buhari exits from office in 2023.

“The North and the South West should rally round the South East to produce a Nigerian President, one who sees the entire nation as his constituency

“We have many detrabilized Nigerians in the South East and we should look out for them to lead this country.

“The North should stop being afraid of a President coming from the South East.Majority of those in the South East do believe in a united Nigeria.

The group said a Nigerian President of Igbo extraction will reassure the region that indeed they do have a stake in the nation.

“The North and the South West, have had a good share of the nation’s seat of power having produced past presidents of the country since after independence.

“The records are there. They are not disputable. After Nnamdi Azikiwe who was a ceremonial President, no Igbo has become President of Nigeria.

“The North have produced more than 10 Heads of State for the country both military and civilian, the South West 2 and the South South 1.The South East none” the group stated

“This shows a Nigerian President of South East extraction is overdue” the statement stated.

innonews - May 15, 2018 0
*PRESS STATEMENT* The 5th Edition of the Ghana Nigeria Youth Summit was held on Saturday 28th April,2018 at the Onikan Youth Center, Onikan-Lagos. Diplomats from the...

Buhari Reacts To Defection Of APC Senators To PDP

innonews - July 24, 2018 0
President Muhammadu Buhari has reacted to the defection of senators of the Peoples Democratic Party, PDP Buhari in a statement signed by Special Adviser on...