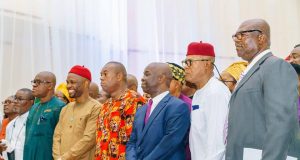 There are strong indications that Governor Hope Uzodinma is now set to assign portfolios to his over 100 aides appointed as Special Advisers, SAs and Senior Special Assistants, SSAs.

The aides had remained “portfolioless” since March 23 they were sworn in alongside Commissioners who were given portfolios.

This newspaper was told that they may not receive three months salaries on the basis that they were not assigned portfolios, designations and offices to function after they were appointed and inaugurated.

The aides mainly loyalists and political footsoldiers of the Governor had alongside the commissioners gone on a three days retreat before they were inaugurated.

Speaking at the swearing in of his Commissioners and SAs, SSAs at the Ahiajoku International Convention Centre,Governor Uzodinma charged them to bring to the fore, their wealth of experience to drive the shared vision of prosperity of his administration which is anchored on the 3Rs of Rehabilitation, Reconstruction and Recovery

He said: “It is important that you don’t take the oath of office as a mere ritual, you must take every word there seriously. You owe it a duty to Imo people and God to ensure that you don’t fail in your assignment. You are now a magnifying glass with which the public will see our government.”