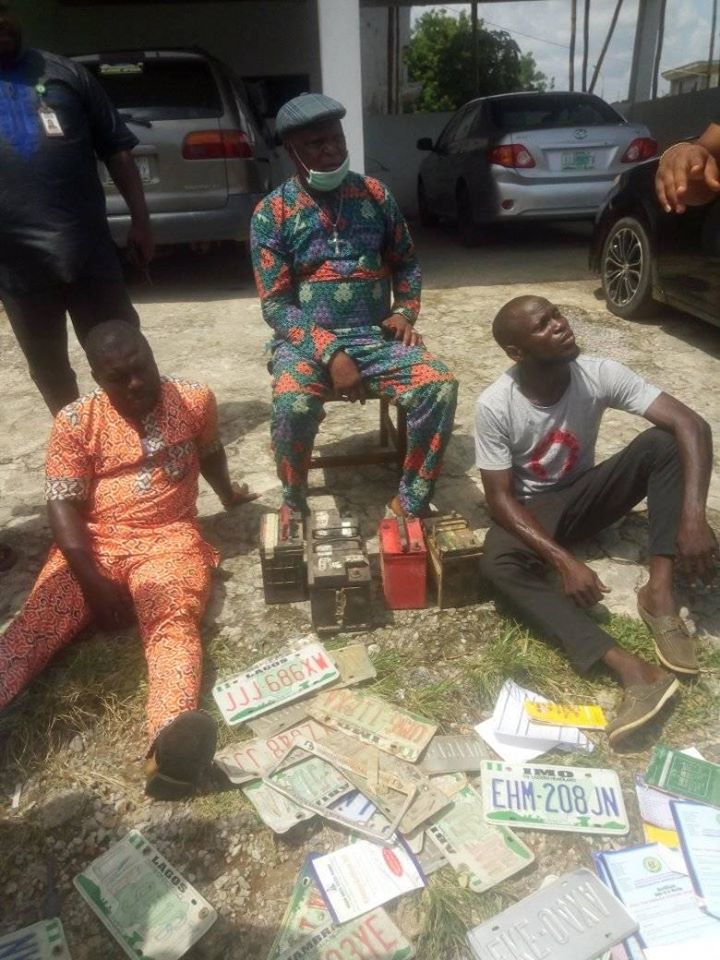 A syndicate of fake dealers on tickets, emblems and vehicle plate numbers has been apprehended by officials of the Imo State government.

The operation was led by the Imo State Commissioner of Transport, Rex Anunobi.

Speaking to newsmen in Owerri, the Commissioner, Anunobi, whose Ministry’s Monitoring, Implementation and Enforcement team apprehended the syndicate at Mbaise park, along Egbu road, with fake emblems, motor plate numbers and batteries criminally removed and impounded by the syndicate, said his ministry is determined to implement a data-based system that will entrench transparency and sanity in the collection of revenue and daily tickets from the private sector.

The clampdown on the syndicate came on the heels of a recent announcement by the Imo State government which announced that it has abolished all Task-Forces.

Motorists in Owerri have been besieged by some fake Task forces who forcefully impose emblems and other illegal levies on motorists, particularly bus drivers.

In a statement in Owerri, Imo State Commissioner of Information and Strategy, Hon. Declan Emelumba, advised that anyone who wishes to pay any of the government’s sub revenue heads should do so directly the State Internal Service found in the 27 local governments or through any bank to the Imo State IGR account otherwise known as the Pay Direct Platform.

He announced that security agencies have been mandated to watch out for those who intend to contravene the law.

The new directive is expected to put an end to extortion by illegal and many taskforces who indulge in illegal sale of emblems.

Today, We Draw A Line, Hate Speech Would No Longer Tolerated...

innonews - January 19, 2021 0
Former Governor of Imo State, Hon.Emeka Ihedioha has been advised to seek and engage fresh political allies in the State, if he...

Subjecting INEC To The Control Of Both The NCC And Or...

innonews - July 18, 2021 0
Naija will continue to stagnate and retrogress unless and until our leaders are enamoured of Nigeria and every...

Why Pregnant Woman Was Rewarded With One Million Naria On Workers...

innonews - May 2, 2018 0
A teacher was rewarded with the sum of one million naria for taking part in a march past with her co – workers during...