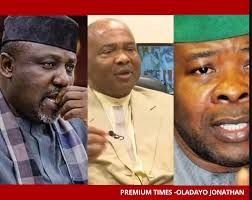 The present political scenario in Imo State, is full of drama, including alignments and realignments of political actors, as the next political dispensation draws near in the State.

Imo State has lately become a theater of intrigues and this is why anything, just anything, is possible on the political stage of the State.

In the past one week, the political scene has been dominated by interesting political drama.

Before these latest political incidents, an alliance of strange political bedfellows comprisng Governor Hope Uzodinma, former Governor Rochas Okorocha, and Senator Ifeanyi Araraume, was consummated in the APC, ostensibly to keep in limbo, Emeka Ihedioha of the PDP, who was ousted by the Supreme Court as Governor of Imo State.

The alliance is heading to the rocks on the basis that Gov. Uzodinma, seems to be going solo in running his government.

He had shut out all Okorocha’s allies from his appointments and allowed several probe panels, instituted by ousted Governor Ihedioha, to continue digging mind blowing deals and under hand practices which took place during the latter’s era as Governor.

Senator Araraume seems to be facing similar ordeal, as Uzodinma never looked his way when making his appointments. The Governor like he did to Okorocha, never considered any of Araraume’s loyalists for appointments.

Araraume is among multitude of aspirants in Imo APC seeking nomination to be candidate of the party for Okigwe Senatorial seat. He is not getting sufficient greenlight for his aspiration from Uzodinma, who remains a huge determinant factor on who picks the APC Okigwe zone Senatorial ticket and eventual Senator of the zone.

Recently, Governor Uzodinma cancelled all salaries and benefits accruable to all former Governors in the State and lately, the Imo State House of Assembly, is going for Ihedioha’s jugular, by instituting a probe of LG funds during the latter’s reign as Governor of Imo State.

Analysts contend that based on these unfolding developments, it is clear that there is love lost between Governor Uzodinma and his ersthwhile allies and it will take a little time for them to vent their displeasure. In other words, the bubble may burst sooner or later.

Okorocha was recently speculated in the media to have his sights on joining the PDP. He or his media handlers never denied the report.

Emeka Ihedioha is still nursing his sack as Governor of the State, and is believed have commenced underground moves to upstage Uzodinma, who is behind his fall.

Ihedioha do have firmer grip of the PDP in the State since those who left the party were not his political soulmates in the first place. It is public knowledge that Ihedioha pulls the strings in Imo PDP and whosoever does not align with his political dance steps is edged out.

How disposed he will be to open up the party for others to join him for an alliance is yet to be deciphered.

However as it stands now, the PDP in Imo State can become a fertile ground for those who are opposed to the style of Hope Uzodinma, who has shown clearly that he does not intend to share the spoils of power with anyone.

Uzodinma has indirectly opened a “meeting point”for Okorocha, Araraume, Ihedioha and possibly, Senator Samuel Anyanwu, to congregate against him.

Senator Anyanwu has continued to insist that he remains a member of the PDP despite the movement of his political allies such as former State Chairman of the PDP, Charles Ezekwem, to the APC.

Uzodinma’s political disposition is capable of unconsciously leading to an alliance of Okorocha, Ihedioha, Araraume and Senator Anyanwu in the future.

And the PDP in the State appears to be the rallying ground for such possible alliance for the trio which will certainly be a lethal political weapon in 2024 for Uzodinma and the APC. Time will tell.