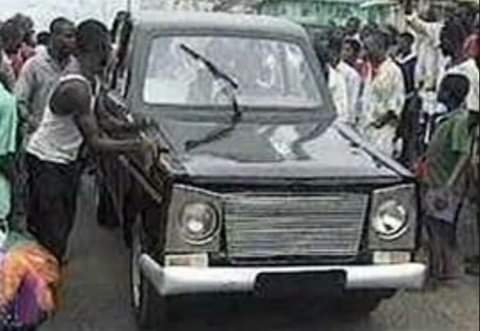 The car was described by the BBC as the “African dream machine” because 90 percent of it’s parts were sourced locally.

The car at that time, would have taken the world by storm. It would have been cheap and affordable because it’s projected cost was put at 2000 dollars.

With it’s production done at Izuogu Motor plant at Naze in Owerri North LGA of Imo State, the prospects of an industrial revolution in South East Nigeria and in Igboland was in the offing.

Components of the car were locally made. It was equipped with locally made 1.8L four cylinder engine that got 18mpg, which made it have a top speed of 140km/h. Front wheel drive was chosen over Rear Wheel Drive (RWD). The choice of a Front Wheel Drive (FWD) was because a transmission tunnel, which RWD would require, would be more expensive to fabricate.

Other components of the car were also locally sourced.

After the production of the prototype, then Military Head of State, General Sani Abacha constituted a 12 man panel of Inquiry, made up of professionals to ascertain the road worthiness and authenticity of the car.

The Commitee after concluding it’s assignment gave Izuogu’s Z-600 a clean bill of health and went ahead to recommend that some of the bumps on the body of the car be made smooth.

Z 600 was eventually unveiled at a ceremony which had in attendance then Chief of General Staff, General Oladipo Diya, more than 20 foreign ambassadors and thousands of jubilant people. At the event, the Nigerian Government promised a grant of N235 million naira to Dr. Izuogu

The grant never came till date.

In 2006, the South African government took interest in the project and invited Engr.Izuogu.

He was told to make a presentation of the car at an event witnessed by renowned world class engineers. After his presentation, he was invited to set up a plant in South Africa and commence production of the car.

Mr. Izuogu was reported to have relunctantly agreed to the offer, because the benefits of the production of the car being sited in Naze, Imo State would deny job opportunities to hundreds of Nigerian youths.

However, on March 11, 2006, at about 2:00am, some heavily armed men broke into the factory at Naz where z 600 was manufactured and carted away machines, tools and the notebook of Z 600, the design file of the vehicle which contained the design history for the mass production of the vehicle.

The inventor of the vehicle, Mr. Izuogu reportedly described the incident as an economic disaster.

He added that over N1 billion naria was lost including time and energy to design and produce the moulds.

innonews - May 20, 2017 0
Outrage has continued to trail the protest by women from Abiriba community in Abia State who went half naked yesterday to support the agitation...