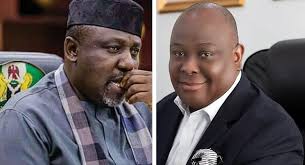 Izunaso who had represented Orlu zone at the senate is believed to be eying the senatorial seat of Orlu zone in 2023 presently occupied by Okorocha. There has been no independent verification of this insinuation though it has been muted in political circles.

Izunaso had crossed over to the All Progressive Grand Alliance, APGA, in 2019, where he vied for the senatorial seat but lost to Okorocha who won the contest though in controversial circumstances.

Izunaso and Okorocha do have political scores to settle. Izunaso may not have forgiven Okorocha for masterminding his fall at the APC National Convention in Abuja.

He had wanted to return as the National Organizing Secretary of the party, but Okorocha scuttled the move and backed Emma Ibediro for the position.

Political analysts contend that Izunaso choose to re-align with Uzodinma to boost his chances of returning to the senate if he so desires in 2023. I

Izunaso visited Uzodinma at the weekend pledging his support to his administration. The highlight of the visit was Izunaso’s team fusing into Camp Hope.

Governor Uzodinma was reported to have commended the Senator and his team for making such a bold and wise decision. He promised that their interests will be put into consideration in the affairs of the State.

There have been media reports that there is love lost between Uzodinma and Okorocha in recent times.

Okorocha has not visited Uzodinma since the latter was sworn in as Governor of Imo State. The last public appearance by the duo was at a campaign rally for APC Okigwe North House of Reps candidate, Ms Miriam Onuoha in January, six months ago.

Uzodinma had shut out Okorocha’s men from his government and allegedly reneged on an “agreement” after the Supreme Court sacked Emeka Ihedioha of the PDP. Aside not accommodating Okorocha’s men in his administration, Uzodinma has allowed probe panels instituted by Ihedioha, to continue its probe of the former governor.

Last month, newspaper reports speculated that Okorocha is in talks with the PDP, over fears that Uzodinma may not allow him return to the senate in 2023 on the APC platform.

However, political observers say Okorocha is not leaving the APC because he may have his sight on a higher political position after being Governor and Senator.

innonews - April 20, 2020 0
Airports across the country will remain closed for two more weeks. This was announced by the Minister of...